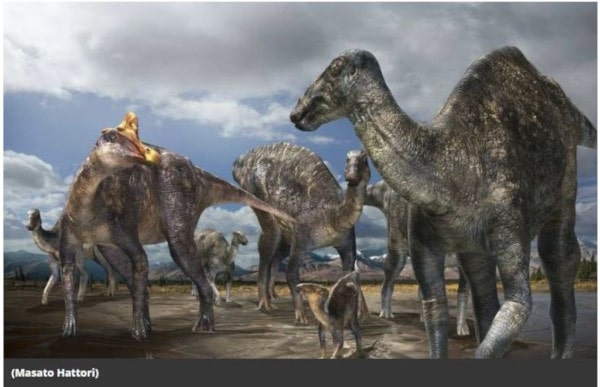 According to Smithsonian.com a new type of Arctic Dinosaur (the duck-billed, crested lambeosaurine) discovered in Alaska, ”shows that a diverse array of dinos lived in the warmer but still harsh Arctic 70 milliion years ago”.

Smithsonian.com reports that “In 2014, paleontologists from the Perot Museum of Nature and Science in Dallas were examining a cache of fossils from the 70 million-year-old bonebed when they came across a fragment of skull that seemed different from the others, reports Priscella Hwang at the CBC. Most of the bones in Liscomb came from a species of hadrosaur called Edmontosaurus, but the team believed this fragment might come from a theropod dinosaur. When that turned out not to be the case, the museum filed the bone fragment away with the other hadrosaurs.”

On closer analysis, the fragment was found to belong to a lambeosaurine, a type of duck-billed dinosaur with large hollow crest on its head. “This first definitive evidence of a crested hadrosaur in the Cretaceous Arctic tells us that we still have much to learn about the biodiversity and the biologically productive environments of the ancient north, and that the story these fossils tell us is continually evolving,” Anthony Fiorillo of the Perot Museum says in a press release.

The Arctic was a bit warmer and forested during the Late Cretaceous when these dinosaurs lived, but life was still much more challenging than it was for dinosaur living in the tropical or subtropical areas of Earth. The Associated Press reported in 2015 that the mean annual temperature hovered around 40 degrees Fahrenheit and was similar to present day British Columbia.

At least four unique dinosaur species have been confirmed in the region and paleontologists believe they have found evidence for a dozen species of polar dinos in the area, suggesting that certain dinosaurs were adapted to the colder, harsher climate. Gregory Erickson of Florida State University, who helped discover a new species of hadrosaur along the Liscomb Bonebed in 2015 says it’s “basically a lost world of dinosaurs that we didn’t realize existed.”

Paleontologists have not found cold-blooded animals like lizards, turtles or crocodiles in the region, suggesting that the polar dinos may have been able to regulate their own body temperature, which may help researchers better understand dinosaur physiology.

How these giant creatures managed to live in the relatively resource-poor Arctic could also help us understand how contemporary creatures may adapt as the current climate changes.

“Even in an ancient Arctic, it was a very rich environment capable of animals that thrived in it,” Fiorello tells Hwang. “Studying this ecosystem and understanding how it works, may help inform what a [modern] warming Arctic may look like.”

These hardy dinos weren’t just restricted to the Arctic. Paleontologists have found polar dinosaurs in Australia and Antarctica that evolved in similar conditions.”