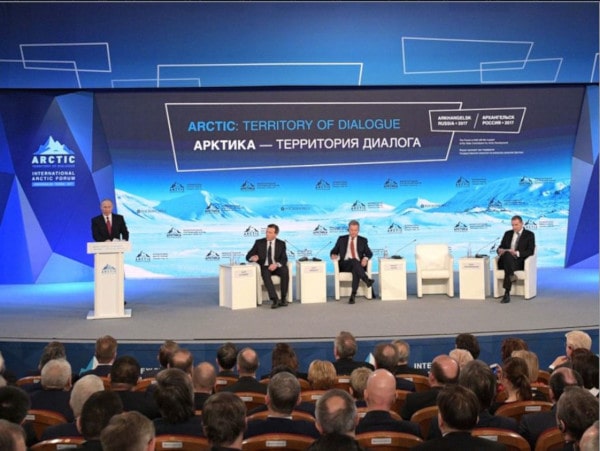 The Russian newsagency PenzaNews has published an article with interviews with leading Arctic experts, Anton Kobyakov (adviser to the president of Russia), Nikolai Korchunov (ambassador-at-large of the Russian Ministry of Foreign Affairs), Hannele Pokka (Permanent Secretary at the Ministry of the Environment of Finland), David Balton (Former Chair of Arctic Council), Alexander Kirilov (Director of Russian National Arctic Parks) and Halldór Jóhannsson (Director of Arctic Portal) on the Arctic and its developments “IAF in St. Petersburg to outline new ways of multi-vector cooperation in Arctic“.

“Less than two weeks remain before the start of the V International Arctic Forum (IAF) Arctic: Territory of Dialogue, which will be held in St. Petersburg on April 9–10.

The business program, covering a wide range of topics of the Arctic’s integrated development, will be split into three main pillars: Coastal Territories, The Open Ocean, and Sustainable Development.

The central event will be a plenary meeting with the participation of Russian President Vladimir Putin.

According to adviser to the President of Russia Anton Kobyakov, the Forum is one of the world’s leading platforms for discussing international cooperation “not only concerning the development of the Arctic economy, but also its social development, preservation, and improvements to its ecology and climate.”

“The number of potential participants of the International Arctic Forum 2019 interested in the business programme has exceeded the initially planned quantity by almost three times. We genuinely believe that creation of international projects in the Arctic will provide ground for a breakthrough increase in trade and economic relations between Russia and leading world countries and generally improve the business climate and geopolitical situation. We hear a lot about global threats and risks, but we would like to create positive agenda and set a precise vector to improve the global economic environment,” he said.

According to the organizers, the Forum will be attended by high-ranking politicians and leaders of a number of foreign states, including Swedish Prime Minister Stefan Lofven, Finnish President Sauli Niinisto and Norwegian Prime Minister Erna Solberg.

According to ambassador-at-large of the Russian Ministry of Foreign Affairs Nikolai Korchunov, the Forum will offer a great opportunity for the partners from the Arctic Council, representatives of other interested countries, as well as nongovernmental and international organizations, businesses and academic circles, to discuss the topical issues and challenges of the Arctic region and map out ways to solve them.

“We hope that the work of the International Arctic Forum and of each participant contributes to building of peace, stability and constructive cooperation in the Far North,” he said.

Commenting on the upcoming event, Permanent Secretary at the Ministry of the Environment of Finland, ex-governor of Lapland Hannele Pokka called the IAF “a unique event.”

“I find this year’s agenda very interesting. I am particularly happy that one of the themes of the programme is Sustainable Development. I am looking forward to the thematic session coordinated by Finland on sustainable solutions for reducing black carbon and other emissions in the Arctic. The concrete actions we suggest are upgrading outdated heating and power plants and making shipping cleaner and more sustainable through the use of modern technologies and cleaner fuels,” the politician told PenzaNews.

In her opinion, climate change is the major challenge in the Arctic.

“The Arctic is warming more than twice the rate of the rest of the planet. Yes, there will be new opportunities. However, the consequences and costs of the rapid climate change in the Arctic will be enormous. For example the glaciers melting cause global sea level rise. Thawing of permafrost has serious impacts on infrastructure in the Arctic. In addition, The Arctic plays an important role in global climate and weather,” said Permanent Secretary at the Finnish Ministry of the Environment.

According to her, increasing economic activities in the Arctic also require more attention to the local ecosystem.

“Arctic is a very challenging and difficult environment to operate, because of the harsh climate and long distances. In case damages occur, the recovery time of the ecosystem can be very long and costs huge. This is why we need environmental cooperation and join efforts to protect the fragile Arctic nature,” the politician said.

“Environmental technologies, sustainable infrastructure development and innovation to strengthen the resilience of Arctic communities are opportunities for new jobs and welfare,” she added.

Information on perspectives and projects for the renewable energy sources in the Arctic are really interesting, she said.

“I’m excited to hear the views of the future of the Arctic, especially in connection to the global energy transition. […] There a lot of other interesting topics, like the perspectives for bioeconomy, transport and connectivity, new technologies, risk management, research,” Hannele Pokka said.

In turn, David Balton, Senior Fellow at Woodrow Wilson International Center for Scholars, former US Deputy Assistant Secretary for Oceans and Fisheries, and Chair of the Senior Arctic Officials during the US Chairmanship of the Arctic Council in 2015–2017, expressed the view that the upcoming IAF comes at a good time, as the Arctic Region is attracting a great deal of attention these days.

“I participated in the 2017 International Arctic Forum, held that year in Arkhangelsk, and found the atmosphere there to be open and dynamic, with many speakers not only from various sectors of the Russia Government and society but from a wide range of other places too. I think that this year’s event is likely to have a similarly constructive ambience,” David Balton suggested.

According to him, the Arctic Region is facing serious challenges, primarily socioeconomic and environmental.

“For the approximately 4 million people living north of the Arctic Circle, the effects of climate change and related phenomena have already brought with them a series of problems, particularly for Arctic indigenous communities whose ways of life are under threat. The warming of the Arctic is also creating some new opportunities, however, particularly the prospect of increasing shipping and the development of other economic enterprises. A key challenge will be how to balance the desire for economic development with the need to maintain environmental integrity of the Arctic,” the expert said.

“One successful example of finding this balance is a recent agreement signed by nine nations and the European Union in October 2018, which prevents unregulated high seas fishing in the Central Arctic Ocean and establishes a Joint Program of Scientific Research and Monitoring,” he added.

In his opinion, the IAF aims to improve understanding between its participants.

“This forum, and others like it, offer the opportunity for various governments and stakeholders concerned with the Arctic to exchange views and to understand each other better. This is particularly important at a time of strained relations between Russia and the other Arctic nations,” said former US Deputy Assistant Secretary for Oceans and Fisheries.

Meanwhile, Alexander Kirilov, Director of the Federal State Budgetary Institution Russian Arctic National Park, stressed that the importance of the problem of climate change in the Arctic is indisputable.

“With the change in the process of ice formation in the Barents and Kara Seas, the habitual behavior of animals changes — the polar bear, not finding ice in the sea in winter, is forced to look for food on land. Often, the animal finds food near people’s home. Violation of habitual chains in an ecosystem can be observed in all Arctic zones, and it would be wrong to associate this only with human activities. The Arctic ecosystem today is influenced by several factors, including climate change. The world scientific community is concerned about the data, speaking about the acceleration of the melting of glaciers,” he said.

In his opinion, the IAF is an ideal strategic platform for wide-ranging discussions.

“As a representative of the Russian reserve system, I see the prospects for the development of the Arctic region primarily in the preservation of the biogeocoenosis that has been established in the Arctic for thousands of years in its original form. The creation of zones, where a ban on fishing and animals has been introduced, environmentally safe zones – new SPNRs [specially protected natural areas] is an extremely important task, which should consolidate the efforts of all states. We understand the inevitability of increased human presence in high latitudes, and, as a result, an increase in anthropogenic influence on the environment. The Russian Arctic National Park has a positive experience in eliminating environmental damage in the Arctic, in particular, in the archipelagoes of Franz Josef Land and Novaya Zemlya. In just five years of cleaning up the arctic islands, more than 50 thousand tons of waste was removed and more than 340 hectares of land were recultivated. [...] The general cleaning by the “Russian Arctic” showed that the consolidation of common knowledge, strength and experience gives the most positive result,” Alexander Kirilov said.

The Forum’s business program covers issues of the utmost importance for the national park, he said.

“Preserving the Arctic ecosystem is now a priority for most developed countries, including Russia. It is not by chance that Russia has become the initiator of such a dialogue, which has already been conducted within the framework of the Forum for several years. The prospects for use and preservation of water resources in the circumpolar circle is certainly a very important topic for our organization. The reports and speeches at the Forum will form the basis of future resolutions and will possibly change the course of history,” Alexander Kirilov said and added that representatives of the national park will take an active part in the Forum’s panel discussions.

Moreover, he stressed that the format of the IAF, which brings together politicians, business representatives and the scientific elite, is convenient for constructive discussions.

“All together we communicate at the Forum and acquire new business contacts. Strong cooperation, new joint projects, collegial decisions help us develop our activity and strengthen Russia’s powers in the Arctic region and on the global stage,” he said.

In turn, Halldor Johannsson, Executive Director at the Icelandic company Arctic Portal, drew attention to the fact that the business potential of the Arctic is extremely high.

“The region holds up to 30 % of the unused resources of the Globe and the shipping interest has been steadily increasing. Currently though there are limited developments supporting increased shipping activity in the Arctic, at least by small to medium business operators. […] The cost, complications and potential risk are simply too high, and the return and advantage too small for them to become interested. The concerns of the stakeholders are a clear lack of infrastructure and information services but more that the business case is not there, or at best, is unclear,” Halldor Johannsson said.

According to him, ccommercial development in the Arctic will need to develop in a global context to become successful.

“It will therefore have to be an international undertaking. There is a clear and highly important need for on-going internationally driven research and improved integrated observations, new information services, clear regulations and infrastructure development in the Arctic region, not least related to search and rescue services,” Arctic Portal Executive Director said.

“The Russian Yamal LNG project is a case study and an immediate test of the viability of Arctic sea routes and their potential role as the blue economic corridor. Future activities will likely be driven by the largest international companies that can approach the business of the Arctic from an economic, political and global agenda,” the expert added.

In his opinion, the IAF will open new opportunities for all its participants.

“I believe in international cooperation and that the key to successful cooperation is the understanding and respect for others, their policy, business and culture. The best way to achieve the understanding and communicate for a win-win result is through open internationally attended discussions like at the International Arctic Forum. I therefor expect new friendships that will support the successful development of an Arctic Business Plan for the benefit of all,” Halldor Johannsson concluded.