Could Sami peoples have been among the first settlers in Iceland? 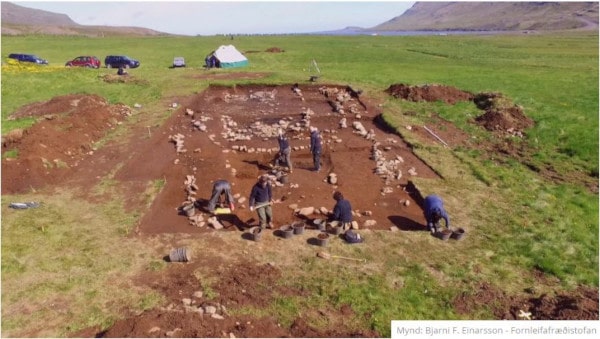 An interesting disvovery was revealed after an archaelogical excavation in the eastern part of Iceland. According to the Icelandic newsprovider RUV “ An archaeologist believes that people of Sami origin may have been among a group that sailed to Iceland before the first known settlers to take natural resources from Stöð in Stöðvafjörður.

Well over 200 broken stones and tools have been found in the area; tools of a type that were only used by the Sami, as far as archaeologists know.

Research last summer at Stöð revealed that the remains of a lodge/cabin believed to be from before the settlement of Iceland were much bigger than previously thought. By far the largest such remains known in Iceland at as much as 45 metres long.

Archaeologist Bjarni F. Einarsson believes the lodge could have belonged to a chieftain who sent workers to Iceland to collect valuable resources. Stone tools found at the site are particularly interesting: “There are highly developed tools made from stone at Stöð. They could be knives, scrapers, even planers. This is, in my opinion, one of the most remarkable things to have been found at Stöð. This is not something people invent on the spot and learn. This is really complicated technology that is only learnt person-to-person, generation-to-generation. And it is possible to ask: who had this sort of tools in the Nordic region? And there really is only one answer: the Sami. So, it could mean that some members of this group could have been Sami, or of Sami origin and had learnt this at home and then followed these people over the sea,” Bjarni says.“