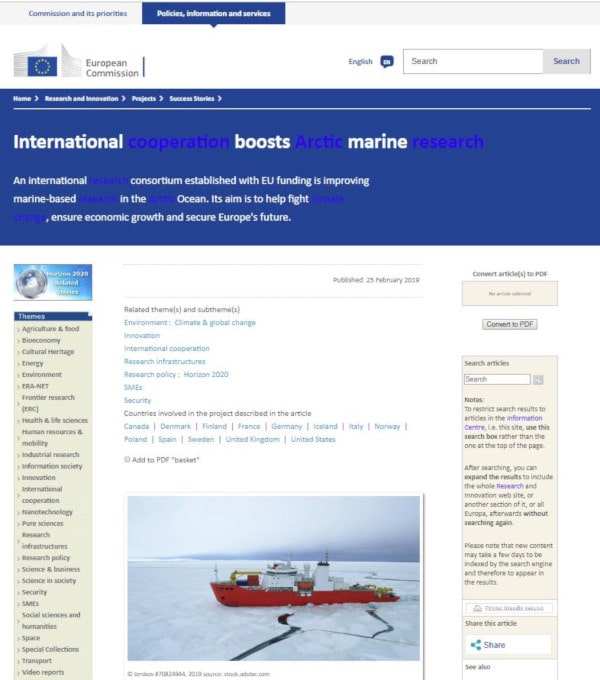 A success story on the Arice project that Arctic Portal is a partner in has been published online on the webpage of the European Commission.

”Climate change and increased economic activity in the Arctic have increased demand for accurate predictions about sea ice and weather and for better information about the region. However, there is a shortage of world-class research icebreakers accessible to European scientists and a lack of coordination of the polar research fleet.

The EU-funded ARICE project was established to ensure that European and international researchers can make optimal use of existing polar research vessels not only from Europe but from North America as well. First, it will establish an international Arctic research icebreaker consortium which will be responsible for sharing and funding scientists’ time on the available fleet of research icebreakers.

Second, it will give European scientists access to six of these vessels based on the scientific excellence of their proposals. Finally, it will work with the maritime industry and explore new technologies to ensure better ship-based and autonomous measurements of the Arctic Ocean. An innovative 3D virtual icebreaker will be created as part of the project to provide anyone with an interest in the subject with real-time data about the Arctic.

ARICE is already giving scientists access to several expeditions. One of these will be on the German RI Polarstern, which will undertake the first year-round expedition into the central Arctic to explore the region’s climate system, from October 2019 until October 2020.

The project will provide training for European early-career polar scientists and professionals, such as PhD students and postdoctoral researchers, as well as early-career technicians and engineers from research institutes and the private sector. They will be trained in the use of devices deployed in ice-covered waters.

Better and more extensive data about the region will benefit both the scientific community and the Arctic marine industry, deepening understanding of the processes behind the changes in the region. This data, which will be used for better weather- and ice-forecasting models and risk assessment studies, is crucial for safe and sustainable operations in the Arctic Ocean.”

The full success story on the EU webpage