Whales are facing a crisis by humans 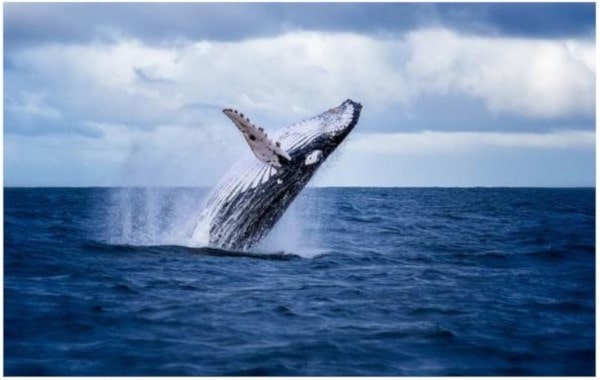 An article written by Anna Kurcirkova about the crises whales are facing by humans was published recently.

According to the article the whales have a significant impact on the environment „First, the giant sea mammals assist in balancing the ocean's food chain, regulating the population so that no one species - predator or otherwise - rises to dominate the water. Without the balance provided by whales, other species may propagate and overtake other, weaker marine life. What at first may seem a boon for the fish species on which whales feed, it will ultimately lead to their downfall. It’s not only the seas that whales have a significant environmental impact on, but also the atmosphere. Several studies show that whales directly help reduce greenhouse gases by promoting carbon absorption within our oceans. Angela Martin, the Project Lead with non-profit Blue Climate Solutions, an offshoot from The Ocean Foundation, explains further.

“Whales eat carbon, not fish,” she notes. “The deep ocean stores a lot of carbon, so it’s worth looking at the contribution of animals and help in conservation efforts.”

When whales expel the waste - yes, when they poop - nutrients are discharged into the water. The nutrients assist in generating marine plant life which in turn use carbon absorbing photosynthesis. Another manner in which the whales promote carbon absorption is through their massive size. As whales move through the water, they displace incredibly amounts of it. As they swim, and more specifically as they make deep dives, their movements stir up nutrients that rest at lower depths. In pushing the nutrients to the surface, where marine plants and phytoplankton feed, those same plants thrive and absorb carbon. Hawaiian based research indicated that roughly 80 whales do the work of over 200 acres of forest as they swim. Another study reflects the yearly average of carbon suppression by sperm whales could equal that of almost 700 acres of forest. Although both studies offer that pinning down the exact impact is imprecise, they are clear that whales mean a lot for not just their immediate environment, but the larger world as a whole.“

The article also goes into other aspects such as whalewatching and the impact it has on tourism. It also goes into aspects that are harming the animals such as commercial whaling, the whaling industry, climate change and pollution.

Read the full article in our library