The SDGs in the Arctic – Local and Global Perspectives 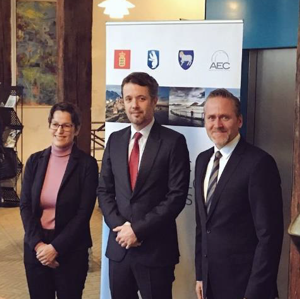 On Friday 1 December 2017, Mr. Anders Samuelsen, Minister for Foreign Affairs of the Kingdom of Denmark, and Ms. Suka K. Frederiksen, Minister of Independence, Foreign Affairs and Agriculture Greenland, in partnership with the Arctic Economic Council and planned together with the Faroe Islands, hosted an international high-level Conference in Copenhagen on the Sustainable Development Goals in the Arctic.

Mr. Martin Breum, journalist and writer on Arctic affairs, moderated the Conference. The Conference offered dynamic discussions on sustainable development in the Arctic, including economic development, and the three dimensions of the SDGs: social; environmental; and economic. Thereby the Conference contributed to the work of the Arctic Council during Finland’s Chairmanship with its emphasis on the SDGs and the deliberations on a long-term strategy plan for the Arctic Council.

The Conference addressed in particular the economic dimension with a strong focus on the role of the private sector and private-public partnerships, the role of the Arctic Council and the Arctic Economic Council, the need for more investments in the Arctic, inclusion of indigenous peoples, and continued local and international cooperation in the region.