Unexpected Life Found at the Bottom of High Arctic Lakes 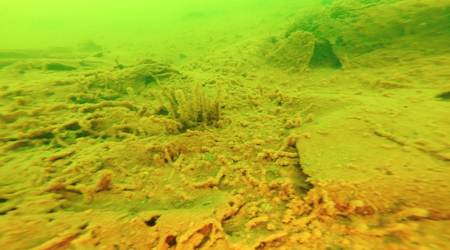 Warmer temperatures mean the Canadian High Arctic’s shallow lakes are no longer freezing to the bottom, allowing tiny creatures to thrive. Researchers predict these new conditions will be inhospitable to fish and will produce more greenhouse gases.

For more than 50 years, scientists from around the world have traveled to Ward Hunt Lake, the northernmost lake in the Canadian Arctic, to study the region or launch expeditions to the North Pole. Until recently, the prevailing notion was that come wintertime, when night casts a long shadow over the island, the waters would freeze up, and the microbial creatures of the deep that inhabit the lake bottom would all but disappear. But surprisingly, a recent study by researchers at Université Laval, Quebec City found just the opposite. Rather, Ward Hunt Lake is no longer freezing up entirely in the polar night, and as a result, a thick, diverse biofilm of living cells – including many species adapted to low oxygen conditions – are colonizing the lake. With less and less ice in water bodies across the Far North, it’s likely the microbes found in Ward Hunt Lake are only the tip of the iceberg, and researchers predict these microbes will exacerbate oxygen loss and the production of greenhouse gases in the future, further warming the Arctic.

Shallow lakes are common across the North, and their productivity is often dominated by cyanobacterial biofilms that form a kind of thick, submerged carpet. How much these Arctic lakes, and their residents, will contribute to global warming, however, is hard to say. Laval scientists are only now beginning efforts to measure methane accumulation. Under anoxic conditions where no oxygen is present, microbes produce methane – a greenhouse gas 30 times more powerful than carbon dioxide. In the Arctic, water becomes anoxic when there is no light available for photosynthesis, as is the case in the polar night, ultimately favoring microbes that do well in anoxic environments and produce methane. Because anoxic conditions are only present in liquid water – not ice – this didn’t used to be an issue. “When lakes freeze to their bottom with bedfast ice, microbial processes cease, and there is no anoxia or methane production,” said Warwick Vincent, one of the coauthors of the study. But as the Arctic warms, fewer and fewer lakes are frozen solid.

“Our results draw attention to how the Arctic is rapidly changing, with feedback mechanisms – in this case greenhouse gas production – that will accelerate the warming process,” said Vincent, who just returned from another expedition to the lake. “The reduced freeze-up with climate warming mean more liquid water for fish habitats; however, the depletion of oxygen under the ice by microbial communities … will make it difficult for fish species to survive throughout winter in these waters.”

“We drilled through two meters [6.5 feet] of ice at a place where radar measurements had indicated liquid water beneath to a depth of 10 meters [33 feet],” said Alexander Culley, co-leader of the project. “We then lowered down a GoPro video camera with a waterproof lamp. It was not until we had hiked back to our base camp later that evening and put the flashcard … in our computer that we saw the bottom was teeming with life.”

In July, the team returned to the lake once again to install new submersibles that will measure oxygen, light and temperature continuously under the ice throughout the upcoming winter. In addition, the team took samples to measure methane accumulation in the lake.

This push to better understand the microbial world of Arctic lakes during winter darkness is part of a larger, global effort to expand research into the productivity of Arctic waters in the polar night. “The ‘dark side of the Arctic’ is currently a mystery, and there is intense interest towards unveiling this poorly understood period that is critical for the ecology of the region,” says Vincent.

Earlier this year, the Scottish Association for Marine Sciences launched a four-year study on Arctic productivity in the seasonal ice zone, and another examining the role of the zooplankton Calanus in the marine food web. A recent study into the “body clocks” of zooplankton found that species in the Arctic regulated their movements using moonlight, in the absence of sunlight, during the polar winter – with significant implications for the ecosystem.

“Our work suggests that [winter] can be a season where the oxygen conditions are totally different from those we measure in the summer,” said Vincent, noting that different microbes and chemical processes occur in the polar night. “All in all, these results suggest that our traditional sampling in summer provides a biased and terribly incomplete picture of polar ecosystems.”