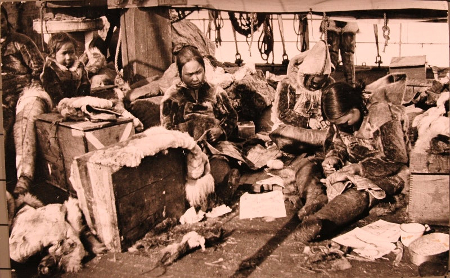 When Robert Peary set out to reach the North Pole, he took along entire Indigenous families. New research looks at the experiences of the women who came along, whose stories have until recently gone largely untold.

In 1891, as explorer Robert Peary contemplated an expedition to the North Pole, he lived with the world’s northernmost people, a community of Greenland Inuit known as the Inughuit.

To utilize the Inughuit’s experience living at the top of the world, Peary hired entire families to come with him and his men on his expeditions. On two separate attempts to reach the Pole, he transported the families to the coast of Greenland and then to the barren Ellesmere Island, before taking only the men on the final pushes to reach the Pole. While much has been written about the men’s journey toward the North Pole, Genevieve LeMoine, the curator of the Peary MacMillan Arctic Museum and Arctic Studies Center at Bowdoin College in Brunswick, Maine, says that almost nothing has been written about the women who were left behind.

Earlier this year, LeMoine changed that by co-authoring an article in the journal Arctic which focused on what is know about the women on Peary’s expeditions. Arctic Deeply spoke with LeMoine about those journeys, the stress these women were under and how it affected them.

Arctic Deeply: As you describe in the paper, Peary took families to the tip of Greenland, and then to Ellesmere Island. Can you describe what these locations are like?

Cape Sheredon, the northern part of Ellesmere Island, is a very different area. It is geologically different, so it is not as hilly and rocky. It is more gravelly. And it is barren – very, very barren. Very little vegetation, and as a consequence, very little animal life on the land. It is right on Nares Strait, which is a narrow passage between Northern Ellesmere and Northern Greenland, which at almost any time of the year can be filled with moving pack ice, so it is not very good habitat for sea animals either.

It has its own beauty – I’m not saying it’s not a beautiful place – but if you’re a hunter, it is a very challenging environment. Archaeologically you see that as well. There are very few archaeological sites around there, as opposed to [Iita] where you can hardly go anywhere without finding an archaeological site.

Arctic Deeply: What was the thinking behind bringing entire families, including children, to both of these locations?

LeMoine: Peary and his men needed good clothing, and they needed those women to sew the clothing. He needed the men to hunt on the expedition and to help drive the dog sleds. He needed the women to make the clothing, so the obvious thing to do was hire the husbands and their wives – hire them as a team – and of course they just bring their children.

Peary also found that the people were much happier. If you can imagine, in a hunting community, if you just hire the men and you take them away for a year, then those women are going to be very hard-pressed to survive. So, it just doesn’t work to separate the families.

When they do the dash to the Pole, which went on for two, two-and-a-half months, then indeed the women were left behind. But at that time they were left behind at the camp site. There was no fear that they were going to go hungry from lack of food. It wasn’t necessarily what they would have chosen to eat, or do, but they weren’t going to starve.

Arctic Deeply: What was the importance of this clothing and sewing?

LeMoine: You can never underestimate the importance of clothing up there. As you can imagine, it’s never very warm, and you always need clothes to keep you warm and dry. They have to be – and they are – very well designed, well engineered, and of course well sewn. Inuit really prize the skill that go into making those. They also, of course, prize the beauty.

On all of Peary’s expeditions, they didn’t wear American-made boots. They wore seal skin boots with caribou liners made by Inuit women.

Arctic Deeply: These women, left alone, faced a lot of stress. One of the reactions that had is pibloktoq or “Arctic hysteria.” What was this reaction, and how often was this happening?

LeMoine: It’s scary, and I think people became kind of inured to it. It is hard to judge, but you get the sense [from journals] that it happened so often that these women – and not only women, but men – had these fits. That the situation became unbearable, really, it was like being in such a foreign situation, and under such social stress that they just had a breakdown. It was varied and life-threatening, really. People would run off onto the sea ice, uncontrolled, and have to be brought back by their friends and families and kept safe until they came down and came out of whatever state they were in.

Often people would strip off their clothes and then run away. And some of them would get almost catatonic – they would just collapse and be unresponsive and stiff.

Arctic Deeply: What kind of sexual harassment went on?

LeMoine: Well, we know, for instance, that some of the men established sensual, sexual relationships with some of the women. Peary, for example, and Henson. They both had children, they both had wives up there that they maintained a relationship with over multiple expeditions. But it is also pretty clear from the journals that the men, some of them being 19th century, early 20th century men, they just thought these “primitive” women were open game when it came to sexual favors. You can just imagine how they must have been pestering them for sexual favors. Whether they were actually physically assaulting them, I don’t know, but I wouldn’t be surprised if it had happened sometimes – it’s hard to imagine that it didn’t happen sometimes.

People don’t write in the journal, “I slept with so-and-so today and she didn’t like it much,” so getting documentary evidence is always going to be difficult, but there’s hints of it in the journals.

Arctic Deeply: What was the biggest takeaway from your research?

LeMoine: Well, to me, the biggest takeaway was that these women were put under considerable stress. It is sort of a microcosm of the stresses that Indigenous people are put under in colonial situations generally. When they got back, and when they were back in their home and eating their food, using their equipment – they went back to, as much as possible, their old life. They were extremely resilient, and the stresses were extremely difficult, but they coped with them.

Arctic Deeply: Was there a particular woman, or women, in the expedition that stuck out to you?

LeMoine: Well, they were all very important. I think that the only woman who was there without a husband was Eqariusaq, who was a very good seamstress. She was also known as “Miss Bill,” because as a young woman in 1893, she went south with Josephine Peary and Marie (Peary).

Josephine had gone north with Peary in 1892, while she was pregnant and so Marie, her baby, was born there. And in 1893 when Josephine went south, they brought Eqariusaq, who was called Miss Bill, with them to Philadelphia and she lived with them for a year and then went back. And then there she was, as an adult and an expert seamstress, on the North Pole expedition.