A lack of safe and affordable housing threatens the health and well-being of thousands of Inuit living in Canada. But the construction of an energy-efficient, culturally mindful home could break ground on finding new Inuit-led solutions to the housing crisis.

Kasudluak spent over two years on a waiting list for a new social housing unit in Quaqtaq, Nunavik, a coastal community of about 400 people. 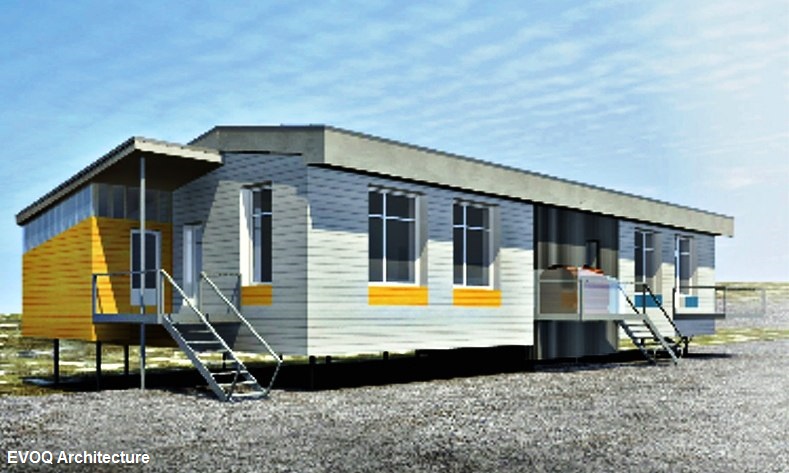 But she probably never imagined she would live in one of the most sophisticated homes in Northern Quebec. The duplex is more energy efficient than usual social housing, and it’s packed with features that encourage Inuit culture and their way of life.

“We‘re the luckiest ones to have that building,” said Kasudluak, who moved into her new home in early 2016.

She and her son had previously lived with her boyfriend’s parents in an overcrowded house, and sometimes the three of them were forced to sleep elsewhere.

Nunavik has been in a housing crisis for years. As of March 2015, Nunavik needed 1,028 homes, according to the Kativik Municipal Housing Bureau (KMHB). The Canadian federal government has set aside as much as C$177.7 million ($136 million) over two years to build affordable housing in northern and Inuit communities.

In 2012, four major Quebec and Nunavik organizations – the Société d’habitation du Québec (SHQ), Makivik Corp., Kativik Regional Government and the KMHB – established objectives for new buildings in the hopes of improving the housing situation in Nunavik.

They wanted a home built for the northern way of life, one with space for cultural activities, a foundation able to withstand the shifting climate, an aerodynamic design that loses less heat and better energy efficiency.

That last point is crucial. If northern buildings are more energy efficient, it means the SHQ, which pays for social housing in Quebec, can save money in the long term – and that could lead to more homes.

That’s when Alain Fournier, from Montreal-based architecture firm EVOQ and the North’s go-to guy when it comes to northern architecture, stepped in.

Fournier has almost 30 years of experience designing northern buildings in the Arctic, including the new Canadian High Arctic Research Station, set to open in Cambridge Bay (Ikaluktutiak) in 2017.

Although Fournier’s architectural team and the four organizations attempted to design a house that would meet the Passive House standard – the gold standard of housing design – they found that it was nearly impossible in the harsh climate of northern Canada. It would not have been “economically feasible,” Fournier said.

“If you save money in a year, this money can be brought back into the construction budgets,” said Fournier.

The duplex sits on piles, steel building supports drilled into the ground, and has energy-efficient triple-glazed windows and high-level insulation, which costs more than the average duplex, according to Shun-Hui Yang, a project director at Makivik.

Piles are common in Nunavut, but aren’t used much in Nunavik. Due to climate change, constructing piles into bedrock is a safer bet than building on the shifting and thawing permafrost. The piles must be driven deep into the ground, said Yang.

After a year of live-monitoring all aspects of the home, the SHQ will have a better sense of whether it will produce similar duplexes en masse, Fournier said. The SHQ is watching electricity consumption and water usage – it has even installed sensors on the doors and windows to monitor their opening. But Fournier doesn’t think this exact house will be replicated hundreds of times over.

“It’s my hope that something else will be designed, taking lessons learned from this,” Fournier said. “I would be very surprised it someone said, Oh, we hit the nail on the head.”

Kasudluak has a couple of criticisms: The stairs are a little annoying and it’s a little far from town. But otherwise, she says it’s perfect.

And the house is very popular when a hunter returns with a beluga.

Kasudluak boasts about the extra space and the cutting boards that make it possible to feast on country foods like seal, fish and muktuk – frozen whale skin and blubber – on the kitchen floor.

“It’s our culture,” Kasudluak said. “If they catch beluga, all the women go to the house. If we do that, it would be so comfortable; it’s a big space.”

During a feast, the kitchen’s island counter is moved and high-density polyethylene panels, stored in the kitchen and far more durable than the cardboard typically used as a cutting surface, snap in place on the floor like puzzle pieces.

Other features, which reflect Inuit lifestyle and culture, were recommended by Inuit following consultations. They include a second exit, a balcony, increased soundproofing, more storage space including a locked cabinet for hunting rifles and ammunition, about a 15 percent increase in the width of stairs and corridors, and large cold and warm porches for storage of hunting gear and harvested animals.

Recently the KMHB – the group that manages and maintains the social housing in Nunavik – conducted a survey of the tenants in the two units of the new duplex.

“The first tenant lived in another house for 46 years. She compares the two houses and she definitely prefers the new one. She notices the air quality is much better,” Vanier said.

The well-being of the tenants is one of the most crucial aspects of the project for Fournier.

“It’s not just physical health but wellness. It’s the sense of feeling good, feeling secure, feeling like you have some sort of control of the environment,” he said.

“You’ve got more space, spaces that you can put your hunting gear. It’s practical but it’s also part of your culture. It’s responsibly cultural, it’s responsibly functional. For any one of us, it increases our well-being.”