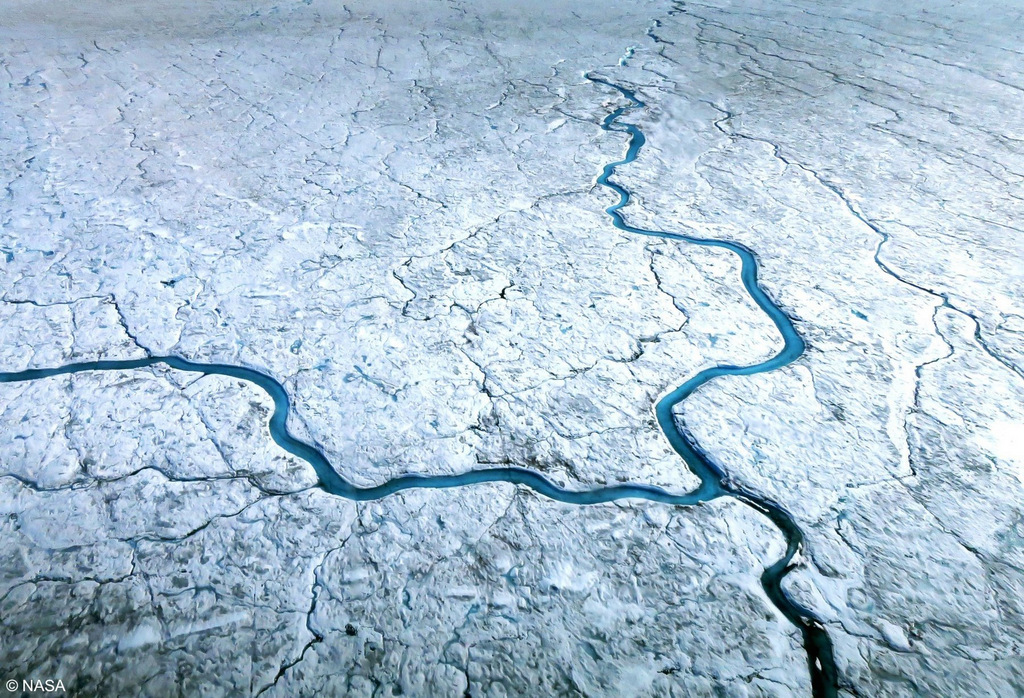 Rising temperatures can’t fully explain the ongoing melting of the Greenland ice sheet. A new project looks at how microorganisms are changing the reflectivity of the ice sheet, helping it warm and melt.

One summer, about four years ago, Martyn Tranter, a biogeochemist at the University of Bristol in the U.K., was working on the margins of the Greenland ice sheet with a group of new students and postdocs when he sat down to take a break. The glacier goggles Tranter usually wore to protect his eyes from the sunlight were broken, so he was wearing his cycling glasses instead. As Tranter looked across the ice surface, eating his sandwich and drinking a cup of tea, he realized the ice in front of him was tinted mauve.

“It was everywhere I looked,” he said. “I turned to the guys and said ‘I think this rotten [melting] ice is full of microbes.’ And they all just burst out laughing.” But shortly afterward, microbiologist Marian Yallop, also from the University of Bristol, found pigmented algae at the site, confirming Tranter’s suspicions.

The discovery launched a £3 million ($4 million) Black and Bloom project to examine the role that microbes might have in darkening the Greenland ice sheet – and boosting its melt.

Greenland is one of the world’s largest pieces of melting ice. It loses ice to the ocean as icebergs peel off the glaciers that run into the sea and when water runs off the melting surface. The winter snowfall adds ice back onto the ice sheet, but over the past several years, Greenland has been shedding more ice than it has gained. In addition to raising sea levels, the meltwater can swell nearby rivers and put communities and infrastructure at risk. In July 2012, meltwater overflowed the banks of the Watson River near Kangerlussuaq, which hosts the island’s busiest airport, and washed out roads and bridges.

Lately, surface melting has become a major contributor to Greenland’s ice loss. “Usually it is split 50-50,” says Marco Tedesco, a geophysicist at the Lamont-Doherty Earth Observatory of Columbia University, in Palisades, New York. “But it is becoming 60 to 70 percent – in 2012 you have a huge loss from surface melting.” Tedesco, who spoke at an event sponsored by SEARCH (Study of Environmental Arctic Change) in July, says that as much as 12 percent more of its surface is melting today than it did in 1979. “That’s roughly the size of Kansas.”

Rising temperatures can’t fully explain the increased melt. Over time, the surface of the Greenland ice sheet has become darker and less reflective. Soot and mineral dust that settle on the surface are among the culprits. So too is the melting ice itself, which creates pools of water that absorb more solar energy than the ice. But only in recent years have scientists also discovered that vast algae blooms covering the ice sheet are also darkening it.

The algae form colorful quilts across the ice surface, in hues that range from greens to purples to reds and browns. Preliminary studies suggest that ice dusted with these pigmented algae has a reduced reflectivity of 10 to 20 percent, says Tranter. “But it may not be all because of the algae. They might be attached to particulates and black carbon, and they might be trapping dust at the surface,” he says. Part of the Black and Bloom project is to understand what these blooms contain, as well as what controls their growth.

The Black and Bloom team will spend six weeks on the ice sheet this summer, focused on the “dark zone” of the Greenland ice sheet – an area in the southwest margin that has been darkening for the past 15–20 years, and has been previously studied by the Dark Snow group, led by Jason Box, a professor with the Geological Survey of Denmark and Greenland.

“We are trying to unpick the dominant factor that is causing the darkening. My guess is that it is a combination of factors, and that it just might be that the dust helps fertilize greater algal growth,” says Tranter. They’ll also send unmanned aerial vehicles across the surface to measure the albedo (“whiteness”) from different altitudes.

That data will ultimately be fed into models to make better predictions about the future of the Greenland ice sheet. “At the moment, the ice sheet is the biggest mass contributor to sea level rise, and it looks like the rate of melt is accelerating,” says Tranter. “If you want to predict 30 to 40 years into the future, you need to know the mechanisms and processes that are driving that melt.”