Aquaculture in the Arctic 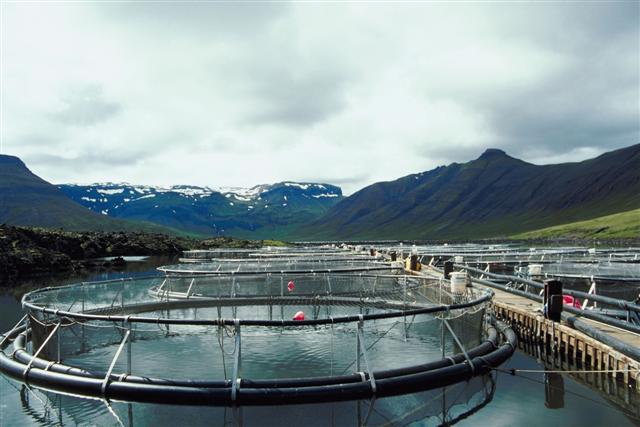 Aquaculture is an important part of the food sector in the world. Aquaculture involves cultivating freshwater and saltwater populations under controlled conditions, and can be contrasted with commercial fishing, which is the harvesting of wild fish.

Aquaculture is predominantly for human consumption. Aquaculture accounted for 45,7% of fish consumption in the world in 2008. It has grown rapidly over the last 50-60 years, the annual production in 1950 was around 1 million tons compared to 52.500 thousand tons in 2008.

Some nations have a long history of aquaculture but Asia dominates the world production, around 88,8% of the world aquaculture production comes from Asia. China alone is responsible for 62,3% of that.

The Arctic states produce enormous amounts of fish product s with aquaculture. The industry is a complicated process, if properly regulated; aquaculture can provide good opportunities for local development without large impacts on the ecosystem. Poorly managed and poorly regulated aquaculture, however, can have severe negative impacts through the release of excessive nutrients and chemicals, as well as escapes of farmed fish and the risk of disease transfer.

More stable and predictable production volumes, as well as large markets in the EU and the US, are among the advantages of aquaculture, the farming of marine organisms, seen from a business perspective. Salmon and trout are common industries both in Norway and USA to a large scale. Other countries participate as well.

The expansion of the aquaculture industry gives rise to two overriding concerns: the intrusion of fish farms into vulnerable marine and coastal areas, and the overall sustainability of an industry that depends on large catches of wild fish to feed farmed fish. 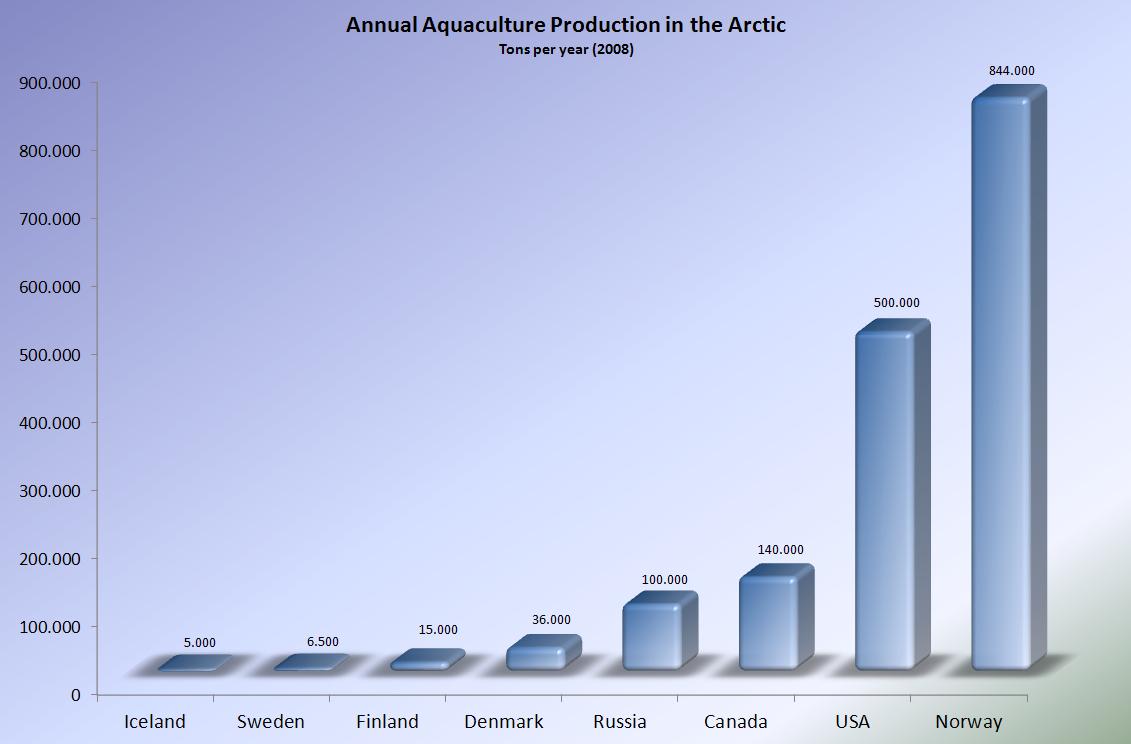 Below is an overview of agriculture in the eight Arctic states.

Norway (844.000 tones): Intensive farming of Atlantic salmon is by far the most important activity, accounting for more than 80 percent of the total Norwegian aquaculture production. Rainbow trout is also important and several marine finfish (cod, halibut) and shellfish species (blue mussel, oysters) are in the process of becoming commercialised. Ninety-five percent of Norwegian production is exported with the EU being the main market.

USA (500.000 tones): The aquaculture industry in the United States of America has become well established over the last 35 years but faces significant challenges to maintain continued growth. The mainstay of the industry is the production of channel catfish which occurs largely in earthen ponds in the southeastern States of Mississippi, Louisiana, Arkansas, and Alabama. Catfish represent 81 percent of the 287.132 tonnes of finfish produced in 2008. There is a steady incline of total production from 1950 when it was around 50.000 tons. The peak was in 2003 when it went over 600.000 tons. But generally since then the number is around 500.000 tons. By law, aquaculture is federally defined as agriculture in the USA.

Canada (140.000 tones): The aquaculture industry in Canada is a dynamic sector which has experienced significant growth since 2000 primarily as a result of increases in production of Atlantic salmon in marine net pens. The salmon farms are located in sheltered waters of the Pacific Ocean off of British Columbia, and in the Atlantic Maritime provinces of Nova Scotia and New Brunswick. Atlantic salmon sales generated 88 percent of the aquaculture industry's total value in 2010 and 70 percent of tonnage.

Russia (100.000 tones): There are four types of aquaculture activity in the Russian Federation: pasturable, ponds, industrial and recreational. There are 295 freshwater fish species in the water bodies of the Russian Federation. 63 fish species, crustacean species and molluscs are reared artificially. 27 fish breeds, crossbreeds as well as 9 domesticated forms of carp, salmon, sturgeon, coregonid and cichlid fish are now cultivated. In this century the production is around 100.000 tons annually.

Denmark (36.000 tones): Ranking sixth in the world's leading exporters of fish products, Denmark has a strong position in fish production and aquaculture has a long and well established tradition in the country. The main product produced is rainbow trout from freshwater ponds and mariculture units, the latter also producing roe as an important by-product. Eel is farmed in recirculated freshwater tank systems; mussels and oysters are produced in minor quantities and turbot fry is exported for further ongrowing. A variety of other species are raised primarily for restocking which represents an increasing share of total turnover.

Finland (15.000 tones): With decreasing catches of wild salmon in the Baltic Sea, aquaculture became a commercial activity in the 1970s and intensified in the 1980s. Most of the aquaculture installations are located in coastal areas and mariculture is particularly important in the Archipelago Sea and along the west coast of Finland. The most important species in aquaculture is rainbow trout raised in sea cages, representing around 80 per cent of the total production from aquaculture. The rest consists of rainbow trout raised in freshwater ponds and a few other finfish. There is also farming of crayfish and production of fry and salmon for restocking purposes in the Baltic Sea.

Sweden (6500 tones): Rainbow is the dominant specie in Swedish aquaculture. Total production in 2003 was just over 6500 tons. Sea trout, arctic char and salmon are amongst other species. Aquaculture is not a big part of the fishing industry in Sweden. It has had a steady production of around 5000-7000 tons for the last 20 years.

Iceland (5000 tones): Aquaculture began in Iceland just before the year 1900 with the first attempts to fertilize and hatch salmonid ova and to release the emerging fry into rivers. During the period 1985-90 a large-scale build up of salmonid farms took place. Most of these farms became bankrupt, however, and the nineties were characterised by stagnation in production. In the nineties, Icelandic scientist and farmers worked on developing aquaculture of species such as Atlantic halibut, turbot, abalone and Atlantic cod. From 2000 onwards, the main increase has occurred in the production of Atlantic salmon, Arctic char and Atlantic cod. Since 2004 Iceland has produces around 5000 tons annually with aquaculture.