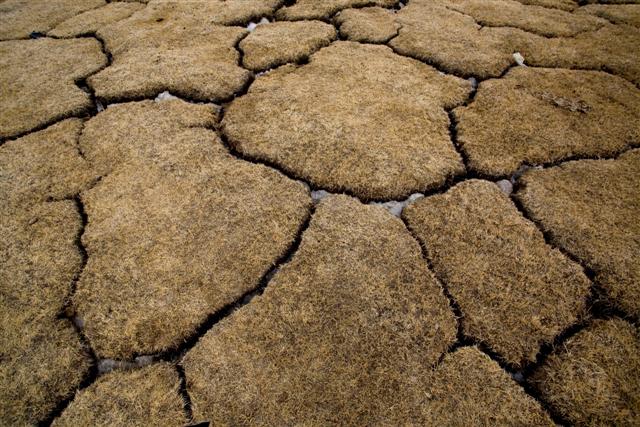 Permafrost covers a large area of the Arctic and a total of 25% of the earth surface. But what is it and why is it in the focal point of contemporary climate change research.

1. What is Permafrost?
Permafrost is defined as ground (soil or rock and included ice or organic material) that remains at or below 0°C for at least two consecutive years. Therefore, the ground is permanently frozen, hence the name Permafrost.

Most of the permafrost that exists today was formed during cold glacial periods. It has persisted through interglacial periods the last 10,000 years. Relatively shallow permafrost (30 to 70 meters) was formed during the last 6,000 years and some during the Little Ice Age (from 400 to 150 years ago). In continental interiors, permafrost temperatures at the boundaries between continuous and discontinuous permafrost areas are generally about -5°C, corresponding roughly with the -8°C mean annual air temperature.

Permafrost in mid- and low- latitude mountains is warm and its distribution is closely related to characteristics of the land surface, slope gradient and orientation, vegetation patterns, and snow cover.

Subsea permafrost occurs close to 0°C over large areas of the Arctic continental shelf, where it was formed during the last glacial period on the exposed shelf landscapes.

Permafrost is geographically continuous beneath the ice-free regions of the Antarctic continent and occurs beneath areas in which the ice sheet is frozen to its bed. 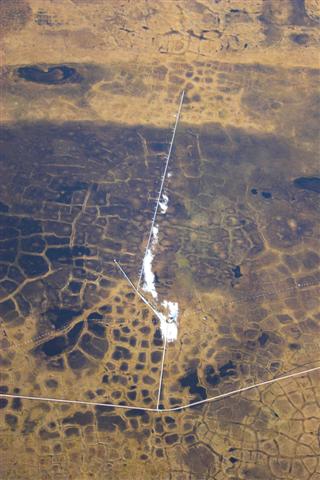 2. Why is it important?
Climate scientists have predicted that global warming will warm the earth of at least two degrees Celsius by the year 2100. Some say the figure could rise to 5 degrees. This will have significant effects on permafrost regions.

Climate change will lead to the earths warming, therefore melting large permafrost areas. The projections are that permafrost will though not disappear completely. A projected decline in the extent of permafrost will have a major impact on the Earth ecosystem, affecting global climate through the mobilization of carbon and nitrogen stored in permafrost.

The largest permafrost areas are in Siberia, where the thickest permafrost can also be found. In Central Siberia the soil can be frozen to a depth of over 1500 meters. Permafrost is also common in Alaska and Canada. Click the map on the right to expand it and see the main permafrost areas.

On the southern fringes of permafrost areas, where the permafrost is already relatively warm, it could disappear completely. Further north, much more soil could melt - perhaps up to 80 centimeters deep instead of 50 centimeters, as it is today.
In all these areas fauna and flora have to adjust. Where the soil was previously dry, it could become wet. Conversely, areas with many lakes can suddenly dry up, because of the thawing permafrost. The thawing can become so severe, that the permafrost becomes permeable and the lake water will seep into the underlying ground.

But humans could ultimately be effected as well, and in fact already have. In Siberia, railway lines have subsided and therefore are ruined. Many areas, in Siberia especially, could be affected since many things are built on permafrost. When the ground thaws, the foundation can fall, like the case with the railway lines. Same applies to some airport runways, roads and households, both in Siberia, Alaska and Canada.

Thawing permafrost can further make Oil pipelines unstable both in Russia, Alaska and Canada. The Trans-Alaskan pipeline system is in some places built on permafrost. If it would fall it could cause a major disaster. Houses have also fallen because of permafrost thaw, like the picture at the top shows.

3. PAGE21
As noted, further research is necessary. Currently, numerous prestige institutions are working together within the "PAGE21 – Changing Permafrost in the Arctic and its Global Effects in the 21st Century" project to better understand the feedbacks of the Arctic permafrost carbon and nitrogen pools to global climate change.

PAGE21 will aim to understand and quantify the vulnerability of permafrost environments to a changing global climate, and to investigate the feedback mechanisms associated with increasing greenhouse gas emissions from permafrost zones.
This research will make use of a unique set of Arctic permafrost investigations performed at stations that span the full range of Arctic bioclimatic zones. The project will bring together the best European permafrost researchers and eminent scientists from Canada, Russia, the USA, and Japan.

The four year project, coordinated by Dr. Hans-Wolfgang Hubberten at the Alfred Wegener Institute in Germany, will contribute directly to the existing permafrost monitoring frameworks to further research into permafrost and climate change and works in close connection with members of the IPCC 5th Assessment Working Group.