Persistent Organic Pollutants (POPs) are chemical substances that persist in the environment, bioaccumulate through the food web, and pose a risk of causing adverse effects to human health and the environment. The POPs are known to spread out to regions where they have never been used or produced, through what is also called the grasshopper effect, having impact to the environment and human health all over the globe instead of having impact only regionally.

This is especially significant for the Arctic region, because many of the substances carry to the Arctic with the air and water currents or through the food chain. It has been demonstrated that for example Inuit in Northern Canada have elevated levels of certain POPs in their blood and fat tissues, which in turn can cause reproductive, neurological, and immune system dysfunctions. The main problem for the Inuit is the contamination of their traditional food to which many of the communities still rely on instead of the imported and expensive southern goods. Contamination levels of wildlife relate largely to the animals’ feeding habits, with predators having higher levels than plant or plankton eaters. This means that in 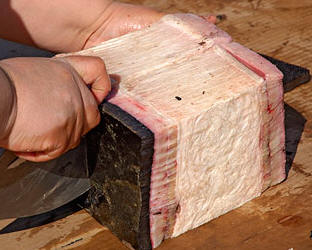 communities where marine mammals or polar bears are one of the main traditional food resources, contamination levels can go up to what is considered way over all risk levels. What is even more problematic is the fact that Inuit have traditionally very low rate of cancer and have virtually no heart disease, which scientists believe to be a result of their fish and sea mammal diet. With lower levels of marine mammals or fish in their diet this might change and pose the Arctic communities to other risks that could perhaps have been avoided with a continued consumption of traditional food.

In addition to the health issues, contamination poses also another kind of risk to the indigenous communities. When traditional food is no longer available, or at least not favorable, a rich part of their culture becomes threatened or can even disappear. This seems especially unfair, since most of the POPs come from south and are not and have never been used in the Arctic communities.

Today, there exist three major international Conventions exclusively regulating hazardous substances like POPs and heavy metals and one convention concentrating on the marine pollution from ships. These conventions do not apply only in the Arctic, since transboundary pollution is a problem of the whole planet, but play a significant role in the Arctic context due to the “grasshopper effect”.

The 1979 Convention on Long-range Transboundary Air Pollution is a framework convention establishing a cooperative monitoring and evaluating system for Europe (EMEP), which is the corner stone of the work around the convention.

The main subjective legal material is introduced in eight protocols, which specify the measures the Parties must take under the convention. Some of the most significant protocols are the 1998 Protocol on POPs and the 1998 Protocol on Heavy Metals. The POPs protocol bans the production and use of some of the most hazardous substances, schedules the elimination and restricts the use of others. The Heavy Metal Protocol targets three particularly harmful metals: cadmium, lead and mercury, laying down stringent limit values for emissions from stationary sources and suggests best available techniques (BAT) for these sources.

The Stockholm Convention on Persistent Organic Pollutants, adopted in 2001, aims at reduction and gradual elimination of POPs altogether. Since there exists no scientific consensus on the causal link between POPs and hormonal abnormalities or risk of cancer is the Convention built on the precautionary principle, principle widely used in environmental law. The convention is governed by the Conference of the Parties, which convenes every two years. There are also several subsidiary bodies established under the Conference of the Parties that in conjunction with the Convention Secretariat take care of the every day administration of the Convention.

The 1989 Basel Convention on the Control of Transboundary Movements of Hazardous Wastes and their Disposal defines and regulates the management and disposal of hazardous wastes. The main objective of the Basel Convention is “environmentally sound management” the aim of which is to protect human health and the environment by minimizing hazardous waste production whenever possible.

International Convention for the Prevention of Pollution from Ships, 1973 as modified by the Protocol of 1978 (MARPOL) is also one of the corner stone conventions concerning POPs and heavy metals in the Arctic. The convention aims at preventing and minimizing pollution from ships - both accidental pollution and that from routine operations.

Arctic Council has been active in researching and promoting the issue of POPs and heavy metal pollution in the Arctic. It initiated Regional Program of Action for the Protection of the

Arctic Marine Environment from Land-based Activities (RPA) in 1998. It further established Arctic Council Action Plan to Eliminate Pollution of the Arctic, which in 2006 was given working group status under the name Arctic Contaminants Action Program (ACAP). ACAP aims at preventing adverse effects, reducing and ultimately eliminating pollution in the Arctic Environment. It implements projects under specific Project Steering Groups, which identify scopes of contaminant problems through development of comprehensive inventories; identify and select the best available techniques, and best environmental practices to address these problems and develop and implement model demonstration projects.