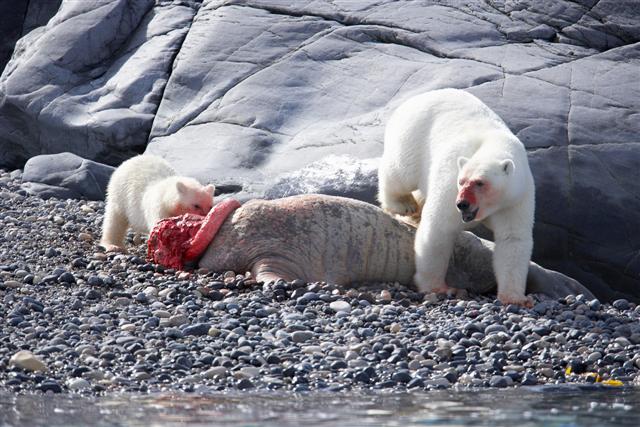 Arctic animals are under severe threat because of warming climate and there might be no polar bears in the Russian wild in 20-25 years. This is the predicion of leading polar bear specialist, Nikita Ovsyannikov, deputy director of Russia's polar bear reserve on Wrangel Island in the Chukchi Sea to the northwest of Alaska.
The Edmonton Journal reports that calculations are predicting that only around 1700 polar bears live around the Chukchi Sea, and that it had dropped from 4000 the last three decades.

„It is worse for Russian polar bears than the bears in Canada or Greenland because the pack ice is retreating much faster in our waters," said Ovsyannikov. „The best habitat is quickly disappearing. It is extreme. What we are seeing right now is very late freezing. Our polar bear population is obviously declining. It used to be that new ice was thick enough for them to walk on in late October. It now will happen much later."

With no drifting pack ice near the shore to hunt from, Russia's polar bears have faced a stark choice. They either must go far out to sea on pack ice that has been drifting away from the coast in the late spring, or forage for food as best they can on Russia's few Arctic islands or along the coast.

However, venturing far from land presents special problems for female bears who traditionally build their hibernation and birthing dens on land.

"Making a den on drifting ice is much more difficult," Ovsyannikov said. "One reason is that there is a greater chance that other bears will disturb them there. "But some females are den-ning on the drifting ice because the ice is freezing up again so late in the fall that they cannot get back to land. We have evidence of this."

There will be no polar bears anywhere in the wild within 20 to 25 years, Ovsyannikov predicted.

However, it is wrong to think that their "extermination" is only happening because of global warming, he said. Another key factor is that warmer air and sea temperatures have forced polar bears to spend more time on land where "too many of them were being shot and poached."

Other species under threat include seals, walrus, Arctic fox and snowy owls, he said.

The big cargo ships transiting to Asia using the Northeast Passage pose another potential danger. Any spill will cause great harm across the north because oil dissolves slowly in cold water and is notoriously difficult to clean up if it comes into contact with drifting ice or ice that is attached to land.

"It is inevitable that economic development will continue," Ovsyannikov said. "So it is up to us to take as many precautions as possible because a shipping accident in the Arctic would be an absolute disaster for the entire ecosystem."