When the ice disappears – Denmark as a major Arctic power 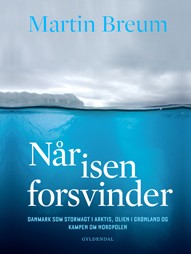 "For the first time in human history a new sea opens before our feet and long time dreams of the old king of Denmark, Christian IV, comes true, long after his passage, where sailing through the north to China is possible". This is mentioned in a book that Denmarks largest publishing house, Gyldendal, has recently published, "'When the ice disappears – Denmark as a major Arctic power, the oil in Greenland and the fight over the North Pole".

The book is its first on Denmark's modern involvement in the Arctic. It is a critical, investigative book by a journalist, who has followed the Arctic for some time. Interviewees for the book include Greenland premier Mr. Kuupik Kleist and former Danish minister of Foreign Affairs, Mr. Per Stig Møller. The book is aimed at the general public, and covers such topics as why Denmark took the lead in the process leading to the Ilulissat-declaration of 2008. It investigates the political reasoning behind Denmark's expected claim to the seabed in the Arctic Ocean up past the North Pole, and it goes deep into the discussion in Greenland for and against oil. It finally examines Denmark's approach to security in the high north and revisits some key historical pointers: The Norwegian claim to parts of East Greenland in 1931, the German Nazi endeavors in East Greenland during the Second World War and other threats to Danish sovereignty over Greenland.

The author, Martin Breum, graduated from the Danish School of Journalism in 1982 and has since then been reporting from political conflicts from all over the world. In the later years a new focus on climate change has caught his interest. The book is in Danish only