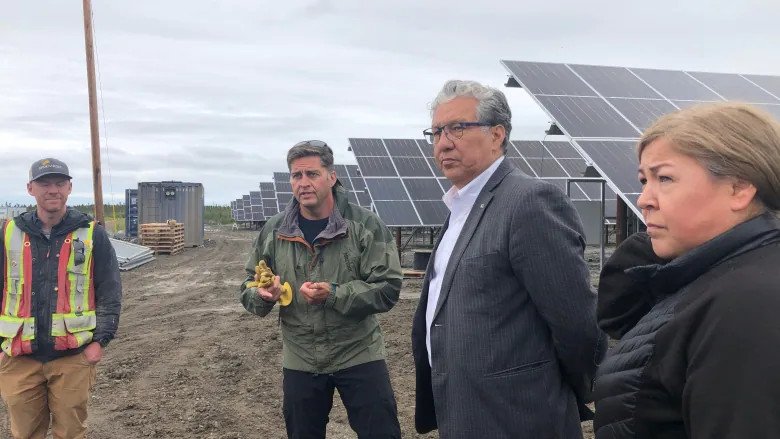 Northern Indigenous-owned and operated company Nihtat Energy Ltd. is developing a 1-megawatt solar farm in the community, according to a news release Tuesday.

"This project is about energy security and diversifying the energy in Inuvik," said Grant Sullivan, president of Nihtat Energy. "This is just adding a bunch of energy security to the community."

It's expected the project will reduce 380,000 metric tons of greenhouse gas emissions per year, the release says, which may help improve the local air quality and save the community $1 million in diesel costs per year.

The new solar farm, which will be made up of about 3,456 panels, is being built on a brownfield site in Inuvik — meaning the area was formerly an industrial site, and was sitting unused. Sullivan said the solar project has been in the works for close to three years.

The company began buying panels and all the equipment in September 2021, Sullivan said, and construction started earlier this summer.

Construction is anticipated to be completed by the end of this year, and Sullivan said they are eyeing spring of 2023 to begin supplying power to Inuvik's grid.

According to the news release, Inuvik consumes the most diesel for heat and power in the Northwest Territories.

The solar project builds on other solar initiatives in Inuvik developed by Nihtat Energy Ltd., including those providing power to Northmart, the Solar Residential Program, the Mackenzie Hotel and the Inuvik Satellite Station Facility.

In a news announcement Monday, Dan Vandal, minister of northern affairs, along with Jonathan Wilkinson, minister of natural resources, announced an investment of $5.586 million from Canada's new Clean Energy for Indigenous and Remote Communities Hub in the project.