State of the Arctic Coast 2010 Report 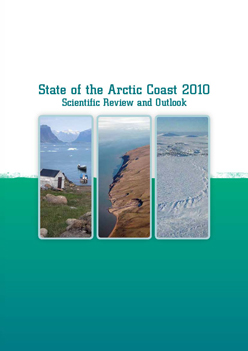 The Arctic coastal interface is a sensitive and important zone of interaction between land and sea, a region that provides essential ecosystem services and supports indigenous human lifestyles; a zone of expanding infrastructure investment and growing security concerns; and an area in which climate warming is expected to trigger landscape instability, rapid responses to change, and increased hazard exposure.

Starting with a collaborative workshop hosted by the Norwegian Institute for Air Research in October 2007, the International Arctic Science Committee (IASC), the Land-Ocean Interactions in the Coastal Zone (LOICZ) Project and the International Permafrost Association (IPA) decided to jointly initiate an assessment of the state of the Arctic coast. The goal of this report is to draw on initial findings regarding climate change and human dimensions for the Arctic as a whole provided by the ACIA and AHDR reports to develop a comprehensive picture of the status and current and anticipated changes in the most sensitive Arctic coastal areas. Adopting a social ecological system perspective the report considers the implications of change for the interaction of humans with natural coastal systems. The report is intended as a first step towards a continuously updated coastal assessment and aims to identify key issues requiring future scientific attention in an international Earth system research agenda.

The draft report is the outcome of this collaborative effort and starts with a thematic review of the state of physical and ecological systems and human communities and activities on the Arctic coast as of 2010. It than moves to a more holistic and coupled-system perspective to identify
knowledge gaps and future research needs. Current knowledge presented and synthesized is based on published literature and other sources.

The document was prepared by an international writing team, including 15 Lead Authors and 27 Contributing Authors. The draft report was released during the IPY Oslo Conference, 8-12 June 2010. The whole report will soon be available for a 2-month public review during August-September with the objective to publish the final version early in 2011. Instructions for submitting review comments will be posted along with the full draft report by the end of July.

For more information and to access the report, see: http://arcticcoasts.org

For more information and to access the draft report, see: http://arcticcoasts.org