Hidden Danger in the Highlands 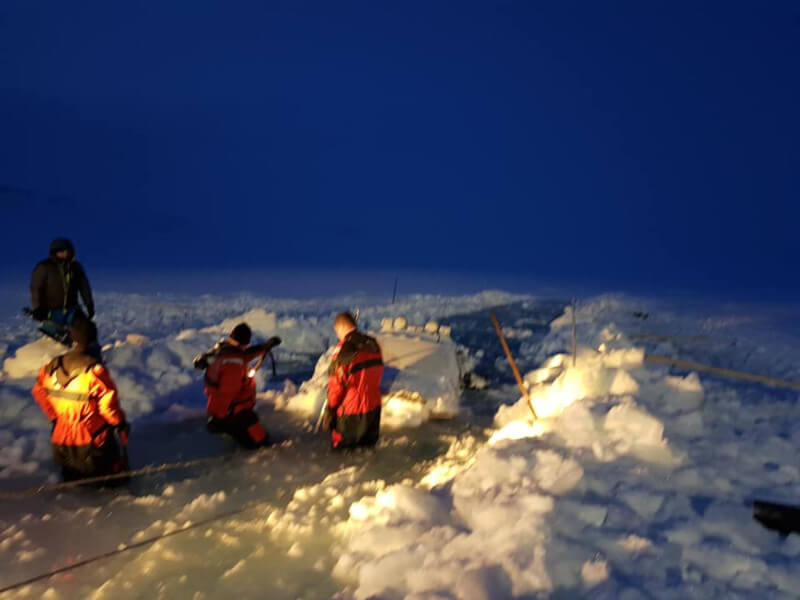 The weather in Iceland is known to be really unpredictable but this winter it has been extremely unpredictable, with heavy winds and snowfalls. According to the Icelandic newsprovider Iceland Monitor travelling in the highlands of Iceland can be really treacherous because of hidden dangers on the way.

"A Dodge pickup truck sank into a 2 to 3-m-deep (6-10 feet-deep) pool, or lagoon, of slush Friday (January 17) on the Sigölduleið highland road (F208), near Hnausapollur maar, at Fjallabak in the Icelandic highlands, mbl.is reports. The vehicle was successfully pulled out of the pool around midnight, last night.

Magnús Kristjánsson was among those who assisted in retrieving the vehicle. He posted an account of the incident on Facebook, in hopes of preventing others from getting stuck.

“There is a depression in the landscape, which gets clogged in winter and fills with water. In the summer, it’s dry, or just a small puddle. People drive along the road, using GPS or following a staked trail, not knowing what’s ahead.”

He states that the Dodge was well equipped for driving in the highlands, but that these kinds of slush pools are hard to avoid. They remain hidden until you land in them.

“You keep driving along hard-packed snow until, all of a sudden, the ice gives way.”

In March of last year, two vehicles landed in a pool of slush at the exact same location. You can see pictures from that incident here . Magnús advises travelers in the area to use a detour, called Krapaleiðin, which takes you along the nearby mountain slopes and allows you to avoid the slush."

Travelling in Iceland, especially in the highlands, can always be treacherous no matter the season. January this year has been really difficult weather wise all over the country and conditions on roads, even main roads icy and unsafe for drivers not used to driving in winter conditions.