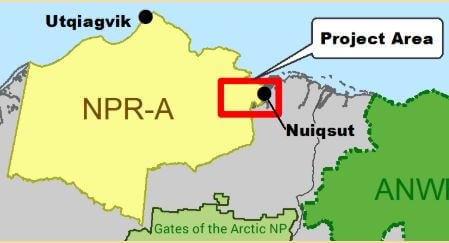 According to the newsprovider Arctic Today the Trump administration on August 23 released documents that pushed two controversial Arctic Alaska projects forward. One is the Ambler Road Project, which would carve a 211-mile (approx. 340 km) road through the Brooks Range foothills to an isolated region of northwestern Alaska that holds copper reserves.

The other an oilfield project, the Willow prospect. If developed, Willow, would be the westernmost producing oil field on the North Slope. The prospect is located in the National Petroleum Reserve in Alaska, and it holds what ConocoPhillips has estimated as up to 750 million barrels of oil.

According to the news "Both projects’ draft environmental impact documents were released in the final days of Joe Balash’s tenure at the Department of the Interior. Balash, the assistant secretary for lands and minerals management, is an Alaskan who has shepherded these and other Alaska projects — notably the plan for oil leasing in the Arctic National Wildlife Refuge. He resigned his position last week and will leave Interior on Aug. 30."

Both the projects has also drawn heated opposition. The Amble Road Project is considered by some to be "an expensive public subsidy to a private corporation."

"The Willow project, though welcomed by Alaska oil industry supporters, also has its critics. Environmentalists and some Alaska Natives say the project, as it is currently planned, would damage some key Arctic habitat and would interfere with Inupiat residents’ access to traditional wild foods."

The newly released documents for each of these projects “will take months to adequately review standing alone; the Trump administration wants to provide the public and those most impacted by these mega-projects a mere seven weeks for both,” attorney Bridget Psarianos said.

To read the full news