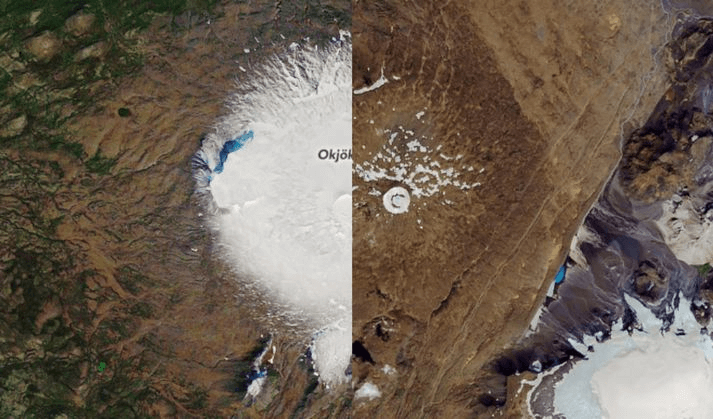 Climate change is melting glaciers worldwide. Only we can stop it.

By Mrs. Katrin Jakobsdottir, the prime minister of Iceland.

Eyjafjallajokull, Iceland’s sixth-largest glacier, gained worldwide recognition when the volcano lurking under it erupted in 2010. Large levels of volcanic ash caused air travel disruptions in Europe, and news reporters across the world struggled with the difficult pronunciation of Eyjafjallajokull, much to the amusement of us native speakers. A less-known and less-tongue-twisting glacier is Ok, which is on a mountaintop in Western Iceland.

But Ok is no longer a glacier.

The ice field that covered the mountain in 1900 — close to six square miles — has now been replaced by a crater lake. It is certainly beautiful, surrounded by patchy snowfields, and is now the highest lake in Iceland. But that beauty quickly fades in the eyes of anyone who knows what was there before and why it is no longer there. Ok’s disappearance is yet another testimony of irreversible global climate change.

On Aug. 18, I will join a group of artists and scientists — along with the former president of Ireland and climate activist Mary Robinson— on a trip to bid farewell to Ok. This trip will include the installation of a memorial shield that reads:

“Ok is the first Icelandic glacier to lose its status as a glacier. In the next 200 years, all our glaciers are expected to follow the same path. This monument is to acknowledge that we know what is happening and what needs to be done. Only you know if we did it.”

This is a local ceremony but a global story.

Glaciers cover 11 percent of Iceland and might be seen as visual thermometers. They have grown and contracted throughout recorded history, most likely reaching their maximum size around 1890, but since then they have gradually retreated, with only short periods of reversals. The process has been particularly fast in the past 20 years. In just a few decades, Iceland may no longer be characterized by the iconic Snaefellsjokull, famously known as the entrance to Earth in Jules Verne’s “Journey to the Center of the Earth.” In short: The ice is leaving Iceland.

But if new beauty replaces the old, does the disappearance of these glaciers matter to anyone other than ice-loving Icelanders and visitors?

An ice-free Iceland is not an isolated phenomenon. Glaciers are melting all across the world, contributing enormously to rising sea levels. Himalayan glaciers help regulate the water supply of a quarter of humankind. Natural systems will be disrupted. The great thaw will also unfreeze vast areas of permafrost, releasing methane, a potent greenhouse gas. The melting of ice sheets in Greenland and Antarctica will, in the long term, result in dozens of feet of sea-level rise. Scientists cannot pinpoint at what level the melting of Greenland or the West Antarctica ice sheets becomes irreversible.

From Florida to Bangladesh, Shanghai to London, communities and livelihoods are already under threat. Even if emissions magically came to an end today, tropical glaciers — found in places such as the Andes Mountains and in East Africa — may not be saved. Mid-latitude glaciers may survive 2.7 degrees Fahrenheit warming but not 3.6 degrees. Most of the earth’s nearly 200,000 glaciers will belong to history books, just like Ok, unless we do something about it and we do it now.

We have a good chance of averting a catastrophe if we keep warming within a 2.7 degrees Fahrenheit limit. Our chances diminish significantly with 3.6 degrees Fahrenheit of warming. We should heed the warnings of the Intergovernmental Panel on Climate Change, which will publish a new report next month. We must strengthen our resolve to cut emissions, so as to move away from dangerous tipping points.

As the prime minister of Iceland, I am determined that my government will play its part. We are currently executing Iceland’s first fully funded action plan, aiming at carbon neutrality by 2040 at the latest. Iceland has decarbonized energy production, and we are working toward greener transport, including by proposing a ban on the registration of cars powered by nonrenewables after 2030.

As a part of our strong commitment to the international collaboration needed to fight climate change, we have used our position within the Arctic Council to form proposals on ways to counter the rapid changes in the Arctic.

In all our actions against climate change, we need to fight for climate justice. Human rights, social justice and gender equality are all intrinsically connected to the fight because climate change affects the poor more than the rich, the underprivileged more than the privileged, and women differently than men. We have called for the integration of gender concerns in global environmental policies, including the workings of the United Nations Framework Convention on Climate Change. Women’s roles as primary caregivers and providers of food and fuel render them more vulnerable to flooding and drought and other consequences of climate change.

On Sunday August 18, we pay tribute to Ok. At the same time, we join hands to prevent future farewells to all the world’s glaciers. Large and small nations, businesses and governments, individuals and communities, we must all play our part. We know what is happening and what needs to be done. Help us keep the ice in Iceland.

See also further information and a video published by NASA at - https://mashable.com/article/glacier-dead-iceland/