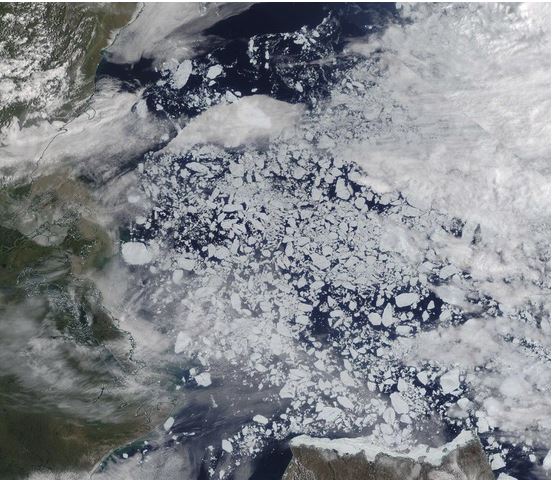 Further explanation on the NSIDC website is "Rapid ice loss for July 2019 was in part driven by warm conditions during the first half of the month. The latter half of the month, in contrast, was relatively cool over the East Siberian and Laptev Seas, as well as near Svalbard and the Canadian Arctic Archipelago, where temperatures at the 925 hPa level (about 2,500 feet above the surface) were 1 to 4 degrees Celsius (2 to 7 degrees Fahrenheit) below the 1981 to 2010 average. These relatively cool conditions were the result of below average sea level pressure centered over the East Siberian Sea, coupled with above average sea level pressure over the west Siberian Plain, which brought cold air southwards and helped to push the ice towards the coast. However, by July 30, the heat wave that had been plaguing Europe moved north, baking Greenland with temperatures at the 925 hPa level 10 degrees Celsius (18 degrees Fahrenheit) above average while parts of the Arctic Ocean saw temperatures 1 to 7 degrees Celsius (2 to 13 degrees Fahrenheit) above average. During this heat wave, about 60 percent of the Greenland ice sheet experienced melt. Despite the fluctuations during the month, the average monthly temperature was above average over most of the Arctic Ocean." 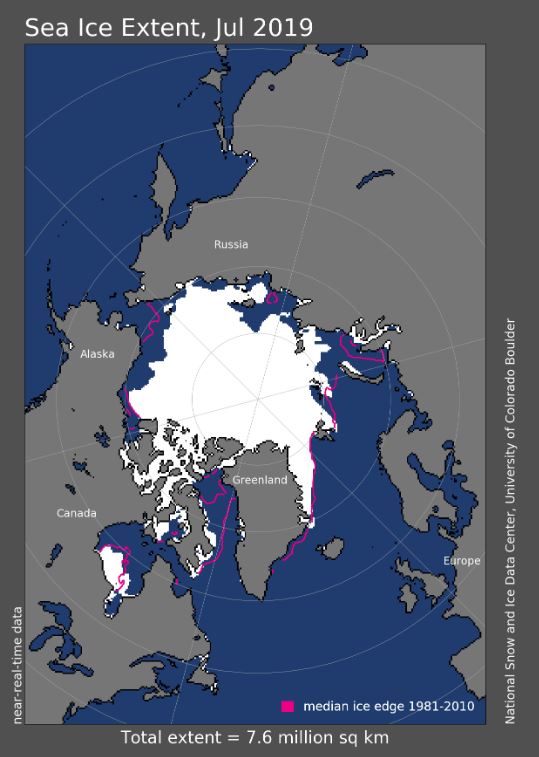 "Another factor that plays a role in ice melt is deposition of dark soot from wildfires on the highly reflective snow and ice surfaces, allowing more of the sun’s energy to be absorbed. Since the beginning of June, more than 100 large wildfires have been observed over Arctic lands, including Alaska, Greenland, and Siberia (Figure 5a). Smoke from these fires has been observed to blow across Greenland and over sea ice areas. Wildfires do not only deposit soot, they also pose a health hazard to local communities. "

"The National Oceanic and Atmospheric Administration (NOAA) has been tracking the melt season with aircraft flights over the ice north of Utqiagvik, Alaska, as part of its Arctic Heat program. While onboard some of these flights in mid-July, Kevin Woods of the NOAA Pacific Marine Environmental Lab in Seattle, Washington took several photos of the sea ice (Figure 5c). The ice appeared to be highly decayed with deep melt ponds, many melted completely through the ice. In other areas, the ice was sparse with isolated floes surrounded by open water. Much of this is likely to melt out completely by the end of the summer."