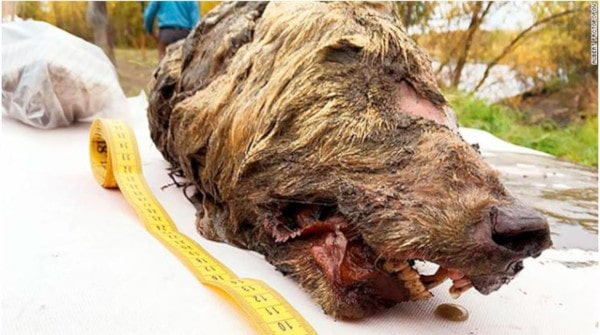 Remains of a 40 000 year old severed wolf´s head found on the banks of Tirekhtyakh River in Yakutia the Republic of Sakha, Russia. According to CNN It has been preserved by permafrost complete with teeth and fur.

Scientists are now building a digital model of the brain and skull´s interior as well as analyzing the wolf´s DNA for further study. Albert Protopopov, director of the department at the Academy of Sciences of the Republic of Sakha told CNN that „“As the planet warms, the region is likely to yeald more remains. The number of discoveries is growing because of the thaw of the permafrost“.

Eventhough discoveries like that are very interesting and can reveal many new things it can also raise concerns as happened in 2016, when an outbreak of anthrax in western Siberia was due to the thawing of a frozen carcass of an infected reindeer that died 75 years ago.