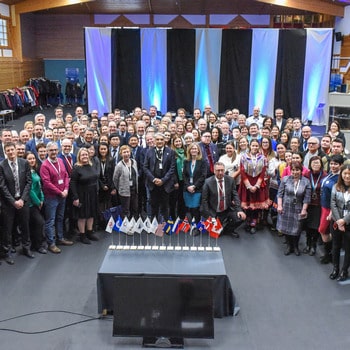 The US is fighting against climate change language in Arctic Council declaration, Arctic Today reports. Very similar to the Ministerial meeting in Salekhard in 2006, Halldór Jóhannsson of the Arctic Portal witnessed and recalls very clearly under the Bush administration.

The 11th Arctic Council Ministerial meeting is to be held in Rovaniemi, Finland on 7 May. Where minister-level representatives from the eight Arctic States will meet to discuss and approve work completed under the two-year Finnish Chairmanship.

The report from Arctic Today: “As the Arctic Council prepares to convene its biennial ministerial meeting in Rovaniemi, Finland next week, representatives from the United States have clashed with those of other Arctic Council member states over the issue of climate change, potentially jeopardizing the joint declaration traditionally issued at the conclusion of such meetings, according to several reports.

The disagreement first came to light last month, as officials were set to meet in Espoo, Finland to finalize the joint declaration. Days before that event, while speaking at an Arctic conference in St. Petersburg, Russian Foreign Minister Sergey Lavrov told state wire service TASS that the U.S. sought to block mention of not just climate change, but also of the Paris Agreement on climate and the United Nations’ 2030 sustainable development goals.

“All others are confident that the strategy will be watered down if we fail to do that. So serious work lies ahead,” Lavrov said.

The dispute mirrors a similar one in the run-up to the Fairbanks Ministerial two years ago, pointed out Eye on the Arctic, after the Espoo meeting failed to bring an agreement on language for the 2019 declaration.

In 2017, after similar last-minute disagreements then-Secretary of State Rex Tillerson eventually signed a declaration that mentioned both climate change and the Paris accord — though not without reluctance. At that time, the Trump administration hadn’t yet formally announced plans to withdraw from the Paris Agreement, though it had been publicly flirting with the idea for some time, and Tillerson heard plenty of public pushback on the subject in Fairbanks.

Those diplomats acknowledged, however, that as the ministerial draws closer, the U.S. has softened its stance. And in comments to both the Post and Eye on the Arctic, Finnish Ambassador Aleksi Härkönen, who is chair of the Senior Arctic Officials, said he was optimistic a deal would eventually be reached.

“There is a willingness on all sides to achieve a result, to be able to get a declaration all can agree on,” he told the Post. “I sense the willingness to make compromises. I believe this will be the outcome. But we are not there yet.”