Results of the ‘Arctic: Territory of Dialogue’ 5th International Arctic Forum summed up in St. Petersburg. 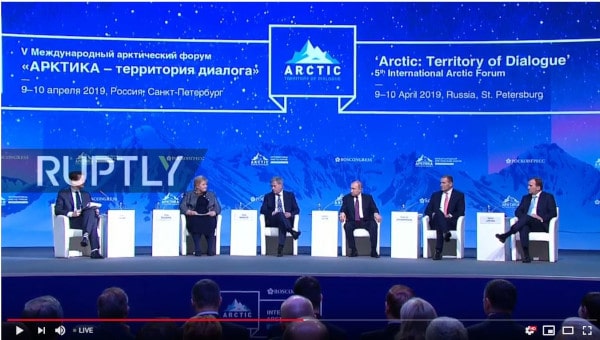 The ‘Arctic: Territory of Dialogue’ 5th International Arctic Forum 2019 brought together more than 3,600 representatives of Russian and international political, scientific and business circles, the public and leading mass media. This is one and a half times more than during the last Forum in 2017.

Then the Forum was attended by 2,400 participants. The number of countries participating in the event has increased from 31 countries in 2017 to 52 countries in 2019. The geographic scope is very impressive. Delegations from China, Norway, Finland, Sweden, USA, Denmark, Iceland, Canada and Japan were the largest.

The Forum was attended by the President of the Russian Federation Vladimir Putin, the President of the Republic of Finland Sauli Niinistö, the President of Iceland Gudni Torlasius Johannesson, the Prime Minister of Norway Erna Solberg, the Prime Minister of Sweden Stefan Löfven, the Ministers of Foreign Affairs of Denmark and Norway Anders Samuelsen and Ine Marie Eriksen Søreide. Officials responsible for Arctic affairs from the Foreign Ministries of eight countries arrived at the Forum, along with the representatives of the European Union. The participants of the International Arctic Forum 2019 included heads of such international organizations as the Arctic Circle, the Arctic Economic Council, the Barents Euro-Arctic Council, the Sami Union, as well as Petteri Taalas, Secretary-General of the World Meteorological Organization, and Patricia Espinosa Cantellano, Executive Secretary of the United Nations Framework Convention on Climate Change. Russia was represented by 7 federal ministers, 10 heads of federal agencies and services, and heads of 15 constituent entities of the Russian Federation.

The Arctic Forum traditionally attracts a lot of attention from the scientific community. In addition to regular participants, such as Arhtur Chilingarov, President of the Association of Polar Explorers Interregional Public Organization, the Forum was visited for the first time by Gennady Cheurin, Full Member of the Russian Geographical Society since 1984, and Honorary Polar Explorer. Sabri Mered, co-founder of the French Polar Cluster, also took part in the Forum for the first time.

A meeting of the Presidium of the State Commission for Arctic Development was held as part of the Forum, with the participation of Yury Trutnev, Deputy Prime Minister of the Russian Federation and Presidential Plenipotentiary Envoy to the Far Eastern Federal District, and other members of the Commission.

The key event on the Forum’s business agenda was plenary session “The Arctic. An Ocean of Opportunity”. In his address, President of the Russian Federation Vladimir Putin said, “Already this year we intend to prepare and adopt a new strategy for the development of the Russian Arctic until 2035. It should unite the activities of our national projects and state programmes, investment plans of infrastructure companies, programmes for the development of Arctic regions and cities. In terms of key social and economic indicators and the quality of life, all the Arctic regions should be brought up to the level not lower than the Russian average.”

“The International Arctic Forum 2019 brought together leading experts, heads of major companies, heads of relevant ministries and departments of the Arctic countries interested in cooperation with the region. We have achieved our goals and are now looking forward to effective international cooperation,” stressed Anton Kobyakov, Adviser to the President of the Russian Federation. “The business programme of the event covered the entire range of topics related to the integrated development of the Arctic zone. The Forum consolidated its position as one of the world's leading platforms for discussing international cooperation not only on the development of the Arctic economy, but also on social development, conservation and improvement of the environment and climate,” he added. The business programme architecture was divided into three pillars: ‘Coastal Territories’, ‘The Open Ocean’ and ‘Sustainable Development’. During the three days of work in the format of sessions, discussions, pitch sessions, and lectures 49 events were held. The Forum was attended by 129 heads of Russian and 12 heads of foreign companies.

The Forum’s exposition featured 24 stands of the largest Arctic regions (the Arkhangelsk Region, the Yamalo-Nenets Autonomous Okrug, St. Petersburg, the Murmansk Region, the Nenets Autonomous Okrug, the Republic of Sakha (Yakutia), the Komi Republic, the Krasnoyarsk Region, the Republic of Khakassia and Republic of Tyva, united by the Yeniseian Siberia project) and leading companies such as Gazprom, NOVATEK, MMC Norilsk Nickel, Almaz-Antey Air and Space Defence Corporation, Damen Shipyards Group, and others. The following organizations presented their developments and stands: the Bauman Moscow State Technical University, the Central Research Institute for Automation and Hydraulics, the National Research Centre ‘Kurchatov Institute’, the Territory of Innovations project of the Roscongress Foundation, as well as the Ministry of Education and Science of the Russian Federation, the Ministry of Natural Resources and Environment of the Russian Federation, and the Federal Agency for Youth Affairs.

45 agreements have been signed at the Forum for the total value of 69.8 billion rubles. (The agreements the value of which is not a commercial secret have been taken into account.) The most important agreements:

The event was organized by the Federal Agency for Youth Affairs (Rosmolodezh) and the Russian Youth Business Assistance Center with the support of the Roscongress Foundation. Speaking at the plenary session “Bringing Together Young People in the Arctic: Opportunities for Personal Development and Career Growth”, the panelists were unanimous that it was impossible to implement large-scale projects in the Arctic without the participation of young people in the foreseeable future. Andrei Platonov, Deputy Head of the Federal Agency for Youth Affairs (Rosmolodezh) noted that “the platform of the International Arctic Forum gives young people a great opportunity to present their projects and get support in their implementation”.

An informative and interesting cultural programme was offered to the guests and participants of the forum, including numerous exhibitions and photo exhibitions, concerts, film screenings, creative meetings and presentations.

Expert and analytical support for the Forum

The Roscongress information and analytical system continued developing the Summary service, an information product of the Roscongress Foundation and TASS News Agency, which provides brief analytical summaries of the discussions, including a description of the conclusions, problems and solutions voiced during the debates. A total of 30 express summaries were prepared based on the results of International Arctic Forum 2019, which were released promptly as the main analytical results of the Forum. The key quotes from the speeches by the Forum’s main participants have been prepared and can be found in the "Expert opinion" tab of the "Analytics" section. The expert and analytical support for the Forum involved more than 30 specialists in economic sciences, international cooperation and digital economy from among staff of Moscow State University, St. Petersburg State University of Economics, the Centre for Information and Legal Support for the Development of the Arctic, the Institute of Regional Economy Problems of the Russian Academy of Sciences, Peter the Great St. Petersburg Polytechnic University, the European University in St. Petersburg and the Far Eastern Federal University. Their work will culminate in a set of expert opinions on the results of the business programme discussions.

In addition, consolidated booklet ‘Results of the International Arctic Forum 2019’ is also to be published and will be available in electronic format on the official website of the event www.forumarctica.ru and on the website of the Information and Analytical System www.roscongress.org.