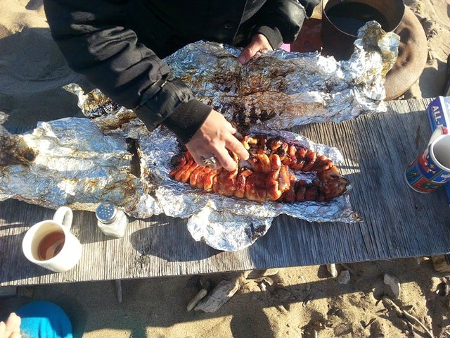 Raw meat is a delicacy in many northern communities, but warming temperatures may be contributing to deadly outbreaks of botulism. Residents are learning to adapt while keeping ancient traditions alive.

More than 20 years ago in Tuktoyaktuk, Northwest Territories, Joe Nasogaluak learned just how deadly botulism can be. “I lost my auntie and uncle to botulism in one day. They were poisoned,” the 58-year-old hunter said. “They were older people. It’s very scary.”

Both his aunt and uncle died after eating beluga whale, known as muktuk in Inuvialuktun, the traditional language spoken in Tuktoyaktuk. The experience completely reinvented the way Nasogaluak, a full-time hunter, prepares traditional food. “That’s why I’m really careful, especially with the warm weather,” he said.

Clostridium botulinum, the bacterium that produces botulinum toxins, is incredibly common and is normally found in dirt, rivers and seawater. But it’s only in oxygen-deprived environments that the spores grow and excrete botulinum toxins, four of which are capable of poisoning humans.

Botulinum toxins can be found in anything from baked potatoes stored in aluminum foil to homemade canned goods. It’s one of the most lethal toxins on Earth. Though cases are still rare, scientists are warning about the potential for deadly outbreaks in a warming Arctic. Clostridium botulinum spores begin producing toxin at 39.2F(4C).

Throughout the North, traditional foods are often eaten raw or aged. But as Arctic temperatures continue to warm, food such as igunaaq, made by burying meat in permafrost for several months, could put people at risk.

Similarly, in the United States, Alaska has the highest rates of botulism in the country, with 36 cases of food-borne botulism reported between 2011 and 2015, all of which were traced back to traditional foods, including seal flipper, aged fish and seal oil.

For the past 10 years in Nunavik, numbers have ranged between zero and three cases per year, said Dr. Marie Rochette, the Nunavik public health department’s coordinator of infectious disease prevention. “Sometimes we don’t have any cases and can have one up to three cases,” she said. “I think in 2015 we had four cases, but it was quite unusual for the past 10 years.”

Earlier in July, a woman in her 50s died in Inukjuak, Nunavik, after eating beluga contaminated with botulinum toxin. Her 30-year-old daughter also got sick, but survived. Inukjuak is on the Ungava Peninsula, an area known to contain Clostridium botulinum bacteria, said Rochette. “We know that especially on the Ungava coast, the marine sediments, the rock, the beach contain the bacteria that cause botulism,” she said. “When there is hunting of sea mammals, they can become contaminated by the soil that we found in this region, especially on the Ungava coast.”

Every health center in Nunavik has botulism antitoxin on site, Rochette said. In Nunavut, antitoxin is available in Iqaluit, Rankin Inlet and Cambridge Bay. Alaska’s department of health and social services keeps a stockpile of antitoxin kits in Anchorage, which are distributed to local health centers.

Earlier this year, Kelly Skinner, assistant professor in the School of Public Health and Health Systems at the University of Waterloo in Ontario, and James Jung, a research assistant, published a review looking at food-borne illness among Canadian Indigenous populations. Botulism was the most common food-borne illness discussed in the 21 papers they examined, Jung said.

The review also showed that women are particularly susceptible to food-borne illness. In the North, men are typically the ones who go hunting while women are often the ones preparing the food. “The women are actually the people who do a lot of the processing of the animals and the preparation of the animals,” said Skinner. The report also noted the importance of food sharing and traditional food preparation as part of Indigenous culture and identity.

In Joe Nasogaluak’s family, August and September were spent at their camp, where everyone worked together gathering berries and hunting geese and beluga to store for winter. “My kids didn’t go to school the better part of September,” he said. “But all my kids, they can live off the land if they have to.”

Though cooking can kill Clostridium botulinum and the toxin, a normal boiling temperature isn’t enough. Food must be cooked to at least 250F(121C), a method most people who do their own canning achieve using a pressure cooker.

Nasogaluak uses the same process for cooking muktuk in his home in Tuktoyaktuk. He puts vinegar in the water and said his system of freezing the meat right away and using the pressure cooker also keeps the muktuk’s fresh taste. “When we eat it, it tastes like it was shot yesterday,” he said.

For Nasogaluak, keeping traditions alive means adapting to environmental changes. Sacrificing prime geese-hunting spots hundreds of miles away for sites closer to the community is just one example. “We stay close to town so we can put geese away right away,” Nasogaluak said. “When I get a whale, we cut it up, we put it away as fast as we can. Even if we’re tired, we come from hunting and we put it away. We work on it and the only time we sleep is when it’s in the freezer.”

Combining traditional knowledge with modern tools is key to keeping people safe and to ensure the next generation learns to do the same, Nasogaluak added.

Skinner agreed. “From the review, there is no evidence to say that these foods are less safe to consume than market or retail food,” she said. “As long as the food is coming from experienced hunters and the food is being prepared by people who are experienced in doing that, then [it] is less likely for there to be problems with food-borne illness.”