Why Arctic wildfires are releasing more carbon than ever 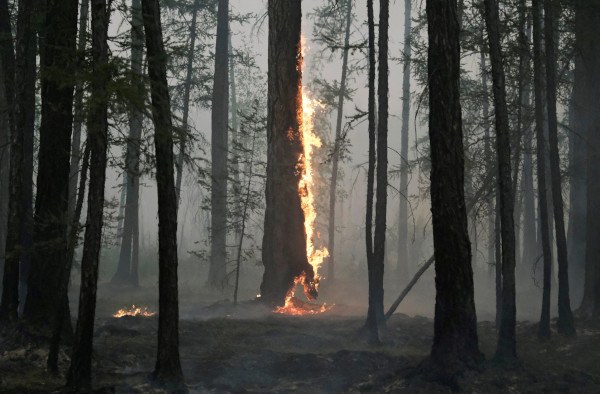 Smoke from hundreds of wildfires darkened skies over the Alaska Interior this summer, with the state experiencing its fastest start to the fire season on record amid hot and dry conditions.

Tens of thousands of lightning strikes ignited the majority of active fires, according to the Bureau of Land Management Alaska Fire Service. By late August, more than 3 million acres had burned across the state — roughly triple what’s seen in an average year, but no longer unusual in a warming world.

With climate change raising Arctic temperatures faster than the global average, wildfires are shifting poleward where the flames blaze through boreal forest and tundra and release vast amounts of greenhouse gases from the carbon-rich organic soil.

Last year, Siberian wildfires scorched some 65,000 square miles (168,000 square kilometers) of Siberian forest, or an area nearly the size of Cambodia. While cloaking the region for months in acrid smoke, some of which reached the North Pole for the first time, those wildfires set a sobering new record for the share of carbon emissions from the world’s highest latitudes.

The Republic of Sakha was the Arctic region hardest hit by fires, which consumed vast swathes of larch forest. By summer’s end, nearly 50 percent more carbon had been released in this region than in any year in the past two decades.

Arctic wildfires that sparked above the 66th parallel north unleashed an estimated 16 million tonnes of carbon in 2021 — roughly equal to the annual carbon dioxide (CO2) emissions of Peru — according to a report by the Copernicus Climate Change Service.

Scientists count fire emissions in carbon, rather than CO2, because they are also assessing impacts on air quality in addition to climate warming.

Fires in the Arctic and boreal regions “have really gone off in ways we haven’t seen in the observed satellite record” beginning in 2003, said scientist Brendan Rogers at the Woodwell Climate Research Center in Massachusetts.

Though the charred boreal forests and tundra still represent just 3 percent of the global area burned each year, the richness of their soils means those wildfires account for roughly 15 percent of the world’s annual carbon emissions from fires — and that number is growing. A Reuters analysis of the Copernicus Atmosphere Monitoring Service’s Global Fire Assimilation System found that high-latitude wildfires were responsible for a greater share of total global fire emissions in 2021 than in any year since monitoring began in 2003, releasing nearly a third of last year’s total carbon emissions from wildfires.

Wildfires are a natural part of the Arctic tundra and boreal forest ecosystems. Some pine trees even rely on the heat from fire to open their cones so seeds can be dispersed.

But climate change is altering the frequency and scale of Arctic-boreal wildfires in recent years.

The polar jet stream that normally circulates air between the mid- and northern latitudes is slowing down, and at times getting stuck for days or weeks at a time, leading to punishing bouts of hot and dry air.

In turn, heatwaves are increasingly gripping the Arctic. In March 2022, the Arctic as a whole was more than 3 degrees Celsius warmer than the 1979 to 2000 average, with records broken in Norway as temperatures surged more than 30 degrees C (54 degrees Fahrenheit) above the normal for that time of year.

Though the Arctic has been warming roughly four times as fast as the rest of the world, “it’s the extremes that matter for fire — droughts, heatwaves, lightning storms,” said Earth system scientist Sander Veraverbeke at Vrije Universiteit Amsterdam. “That’s what’s been happening in Siberia.”

In June 2020, the Russian town of Verkhoyansk, located along the 67th parallel, registered a new Arctic temperature record of 38 degrees C (100 degrees F), according to the World Meteorological Organization.

Lightning, which ignites most northern wildfires, has also increased in the high latitudes. Alaska saw a 17 percent rise in lightning strikes between the mid-1980s and 2015, according to University of Alaska Fairbanks scientists.

“Some places have had astounding increases,” said Randi Jandt, a fire ecologist at the University of Alaska Fairbanks, noting that during the same period summer lightning activity in northcentral Alaska increased by roughly 600 percent.

That’s linked to the warmer air in the U.S. state, where the average temperature in fire-prone areas of Alaska has risen by more than 2 degrees C (3.6 degrees F) since 1979.

Lightning-ignited fires have more than doubled in Alaska and the Northwest Territories since 1975, according to 2017 research in the journal Nature Climate Change.

All three of these trends — more frequent extreme temperatures, slowing air circulation, and increasing lightning strikes — are expected to escalate in coming years, leading to an even more worrisome future where northern wildfires could challenge the world’s efforts to rein in climate-warming emissions.

One study in April in the journal Science Advances projected that wildfires in North America’s boreal forests could end up releasing nearly 12 billion cumulative tonnes of carbon dioxide by 2050, equivalent to roughly a third of global energy-related CO2 emissions in 2021.

Greenhouse gas emissions released during a wildfire aren’t even the greatest concern. Scientists estimate there are 1.5 trillion metric tonnes of carbon stored in the world’s northern permafrost — more than twice what’s already in the atmosphere.

Fire makes permafrost, ground that remains frozen year-round, more vulnerable to thaw as it strips away upper insulating layers of vegetation and soils. When that happens, ancient organic materials — dead plants and animals — begin to decompose, releasing their carbon.

But these post-fire permafrost emissions have been left out of climate models. Measurements rely on long-term field observations, which are hard to get in remote and frigid areas. Severed ties with Russia, after its February invasion of Ukraine, may also hurt data collection. About half of all Arctic landmass is in Russia.

Copernicus’ Global Fire Assimilation System, which Reuters used for its analysis, also does not include post-fire emissions.

This means the world is likely underestimating the impact of high-latitude fires on the world’s carbon cycle.

“This is a source of greenhouse gases going into the atmosphere that can further contribute to climate warming that we hadn’t really been … counting on,” Natali said.

While the rapid spike in Arctic wildfire activity is alarming for scientists, the global area that burns each year shrank by about 25 percent between the late 1990s and 2015, according to a 2017 study in the journal Science.

Africa is largely driving this downward trend. New pastures and roads have created fire-breaks that stop flames from advancing through the grasslands, and northern savannas are transitioning into tropical forest. This has also led to a decline in global fire emissions since monitoring began in 2003, though new regional emissions hotspots have emerged, such as in the Arctic and western North America. And people are still intentionally burning the world’s dense tropical ecosystems.

Every year, farmers burn large swathes of Southeast Asia’s carbon-rich peatlands and the Amazon rainforest to clear agricultural land, resulting in big emissions. A 2021 study in the journal Nature found that the fires in the Brazilian Amazon were releasing about 1.5 billion metric tonnes of carbon dioxide annually.

Not all emissions are the same either. Though fires blaze through more than 1 million square miles in Africa every year, grasses offer less fuel to burn than the boreal forest, resulting in fewer emissions per scorched square mile.

Total emissions from grasslands remain higher simply because “much more land burns, even though the fuel is less dense,” said Christine Wiedinmyer, a research scientist at the University of Colorado Boulder.

But grasses also regrow quickly, locking in the carbon that was released when they burned. The charred boreal, however, might take more than a century to return and sequester the carbon lost.

Plus, fires set by farmers to clear land are much easier to control than raging infernos in remote, northern ecosystems.

Still, the Arctic-boreal can’t burn forever. After three bad wildfire years in Siberia, eventually “there is nothing left to burn,” said Veraverbeke. “Maybe that is a little bit hopeful.”